Last night’s first presidential debate was a great night for challenger Mitt Romney. He was the only one on the stage who looked like he knew what he was there to do (including Jim Lehrer). While Romney tenaciously attacked the president and continued to spin the GOP narrative, Obama sleepwalked through the entire night. He seemed caught off guard by Romney’s articulate message, and completely unprepared to match it with a message of his own. While Romney was passionate and organized, Obama seemed grumpy and defeated. The entire game was played on Obama’s side of the field as Romney took it to the president for 90 minutes. It wasn’t even close. Romney won the debate by a couple touchdowns.

When the dust settles and everyone reviews the tape, the narrative may change a little bit. For one thing, this debate was all about the economy. Obama was always going to struggle in that conversation. As I read the news online today, the GOP folks are excitedly spiking the ball. Yet, while the Republicans bask in the glow of their candidates superior performance, you can bet that the Dems are working through what will surely be a windfall of new ad material. This was a good example of the one clear advantage of being a challenger. None of your plans need any basis in reality. “What I plan to do,” is just a phrase the incumbent isn’t able to use very easily. If you campaign in poetry and govern in prose, Obama seemed unable to make the switch from governing prose to campaign poetry

Romney’s campaign advisers need to get some serious recognition for for superior strategy and preparation. The GOP team had a perfect approach planned, they had done their homework, and Romney was flawlessly prepared. He hammered the jobs narrative with impressive discipline. Obama’s advisers clearly did not have the president ready. I keep hearing the Carter/Reagan comparisons from the right, but I think I would compare last night’s debate to Clinton v. Bush 01. It was a pretty lopsided win for the R’s.

Progressive Christian
The Best or Worst Pollsters in the 2012...
Paperback Theology 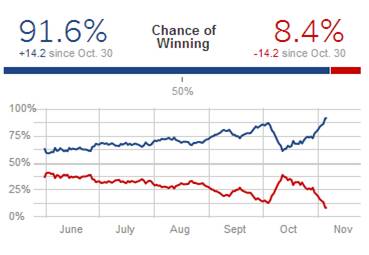