Best Marriage Quote Ever: Alexander Schmemann on Marriage as Mission 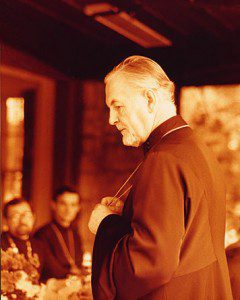 In light of the Supreme Court Ruling yesterday about marriage and DOMA, I wanted to share the best marriage quote I’ve ever read, at least in relation to the modern institution of marriage. Alexander Schmemann was an Eastern Orthodox priest, writer, and theologian. His book For the Life of the World is a must-read. It is on my list, The Top Ten Books Every Christian Should Read. Schmemann remind us that marriage can become an idol or an icon (something that points beyond itself to God).

“A marriage which does not constantly crucify its own selfishness and self-sufficiency, which does not “die to itself” that it may point beyond itself, is not a Christian marriage. The real sin of marriage today is not adultery or lack of “adjustment” or “mental cruelty.” It is the idolization of the family itself, the refusal to understand marriage as directed toward the Kingdom of God. This is expressed in the sentiment that one would “do anything” for his family, even steal. The family has here ceased to be for the glory of God; it has ceased to be a sacramental entrance into his presence. It is not the lack of respect for the family, it is the idolization of the family that breaks the modern family so easily, making divorce its almost natural shadow. It is the identification of marriage with happiness and the refusal to accept the cross in it. In a Christian marriage, in fact, three are married; and the united loyalty of the two toward the third, who is God, keeps the two in an active unity with each other as well as with God. Yet it is the presence of God which is the death of the marriage as something only “natural.” It is the cross of Christ that brings the self-sufficiency of nature to its end. But “by the cross, joy entered the whole world.” Its presence is thus the real joy of marriage. It is the joyful certitude that the marriage vow, in the perspective of the eternal Kingdom, is not taken “until death parts,” but until death unites us completely.” – Alexander Schmemann, For the Life of the World, Chapter 5, p.90.

Schmemann is rightly claiming that marriage is unintelligible not only outside of the church, but more importantly outside God’s mission of redemption. The mission of God is what gives marriage a proper sense of itself. He’s exposing one of the most important realities of our current culture when it comes to marriage: Most people think of their own marriage as something that exists “for my spouse and I, so that we might be happy and have our needs fulfilled.” Schmemann unequivocally says this is idolatry. It is allowing the marriage to turn in on itself – we look to our marriage to meet our needs and it will always fail and thus so many marriages end in divorce.

Christian marriage does not exist for the benefit of the two people in the marriage, it is for the benefit of the world, that God would be glorified in it. The main purpose of marriage is not the enjoyment of the two people who are married, the main purpose of marriage is to glorify Christ as we participate in the Mission of God. Anything less is making an idol out of marriage. When it comes to marriage, this is my primary concern, and it points us to the deeper meaning of marriage. I’m challenged by this today.

Stop Telling Me about the "Lazy"...
Honest to God
Related posts from Paperback Theology

Progressive Christian
Why Are We So Easily Offended?
Paperback Theology