Bones & Honey: The Problem of Allegory 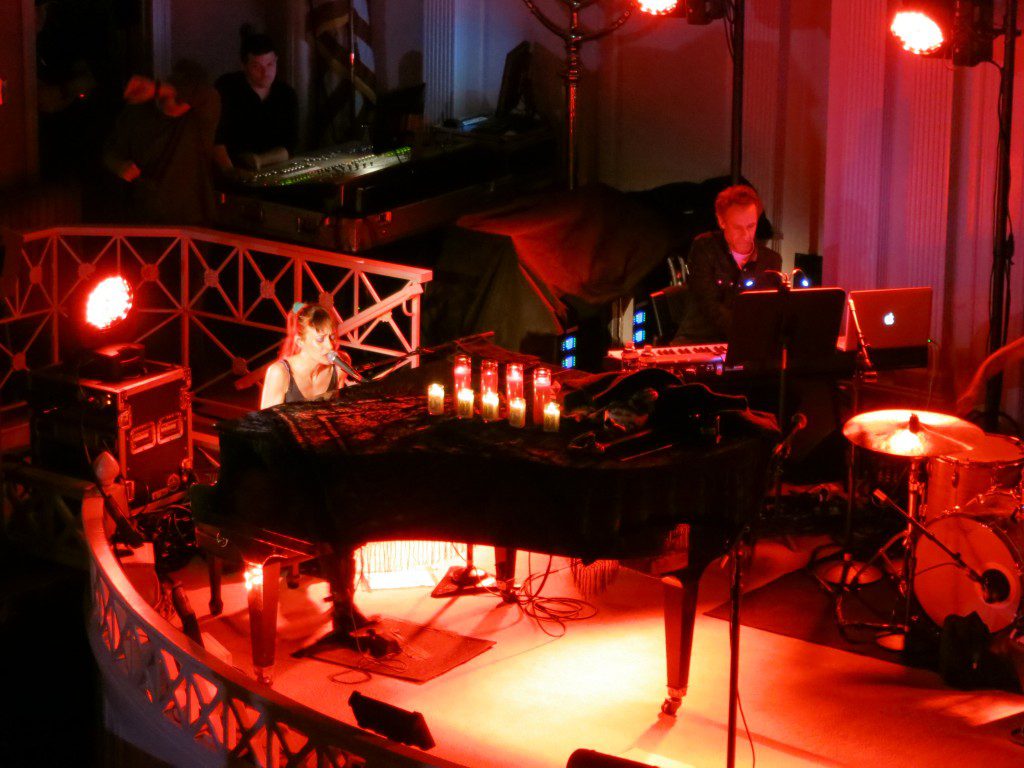 I’ve been thinking about fury. Specifically, my fury.

It’s a new experience. The course of my life has been relatively blessed, so much so that the physical feeling of absolute, inarticulate rage, expressed in finger-trembling and skin flushing and hyperventilation and everything else, is a recent discovery, a novelty of the last year or so. I won’t go into the whys or wherefores. I will say there’s at least one bonus: I find it weirdly satisfying to suddenly know what other people mean when they say their blood is boiling. Don’t worry, I haven’t thrown anything at anyone. Yet.

To calm myself down, I’ve been reading The Cloister Walk, an unassuming yet fierce book by Kathleen Norris. It’s great: she spends a year in a Benedictine monastery to try to understand, as a nonbeliever, what the liturgy and the community have to offer. A lot, it turns out. There, she says, the scriptures are so often repeated they make an oral clock, and the saint’s stories are so well known they provide a common language for every pain and joy felt by the monks. The weeks when the Psalms are read aloud, she writes:

“The psalms are full of shadows–enemies, stark images of betrayal: ‘Even my friend, in whom I trusted, / who ate my bread, has turned against me’ (Ps 41:9). …Psalm 5 pictures flatterers, ‘their throat a wide-open grave, all honey their speech” (v. 9).

As C.S. Lewis has noted in Reflections on the Psalms, when the psalms speak to us of lying and deceit, ‘no historical adjustment is required. We are in the world we know.’ … ‘He loved cursing; let curses fall upon him. / He scorned blessing; let blessing pass him by.’ The imagery roils like a whirlpool, drawing us in and down: ‘He put on cursing like his coat; / let it soak into his body like water; / let it sink like oil into his bones.'”

It is, she says, an accurate portrait of the psychology of hatred. That sounds right, insofar as hatred can be assumed to be universal in its expression. But sometimes I wonder if it can be, if Lewis is right that we are in the world we know.

I went to see Fiona Apple in concert two weeks ago, and she was glorious, of course. Magnificent, tense, incandescent, totally on fire. She held herself right up against the microphone, with no fat in her lyrics or her person, no cushion between herself and the rest of us. She hasn’t toured in years, and most of the audience was appreciative and rapt, sitting or standing in a near-total reverence. How often do you get to bask in the glow of a person-sized nuclear reactor? But there was one girl up in the balcony, where I was, and another down on the lower level beneath the stage, both in black tank tops, and they were neither still nor quiet. They danced ungracefully and pointed their fingers and yelled between songs. They were uncoordinated, boorish, and really, really into what was happening. The lower girl came right up to the stage, four feet down, and mouthed the words to ‘Extraordinary Machine,’ while Fiona grinned and gave the the crowd a knowing look. I assume this happens a lot.

I went to the show expecting to feel this same kind of abandon. Who of her fans didn’t listen to ‘When the Pawn…’ and find there a dense and raw language to pin our own fears and hopes on? To see her now, I had thought, would channel everything I’d been feeling lately, and purge it. No one writes wrath like Fiona. But instead, what I experienced was the artist as herself, utterly at home in her body and her work. There was no room for me or my own troubles, and that made me want nothing more than to corral that audience girl, let her come down from whatever she was on, give her a sandwich, and see what she had to say: about herself, not about Fiona Apple.

Because I’ve been saving my curses up. I’ve been writing them in loving, harrowing detail. I’ve been keeping them for when their objects are gone and there’s no danger of wasting the feeling with the wrong words in an impulsive moment. I’ve been crafting my equivalent to sullen-girl rock. I have the stubbornness of my particular history, an unwillingness to relate, a wish to spell out my own hard-edged specifics. This selfishness is inordinately productive, if not exactly 100% totally humble or modest or any of those self-effacing Christian things.

It can feel, sometimes, that Mormonism requires such effacement. Wait–it would be more precise to say that I know people who feel that way, who sit in church and do not feel recognized, who feel that they are, in some way, distanced from what is happening around them, or that the words spoken over the pulpit are a set of expectations and definitions that stifle or repress them in some essential way. Sometimes it is political disagreement, sometimes cultural difference, sometimes the mere brute fact of loneliness. That this happens is tragic, because I don’t find very many good arguments for it in scripture. Think of the metaphor of the body of Christ, made up of unique organs and limbs and functions, all serving the whole. It’s the model of the ecosystem, not the assembly line. The discrete, the I, the you that is different from me: these things are (or should be) worthy of enormous respect.

But the feeling persists! Maybe our existing survival mechanisms are the problem. Our disagreements with the mainstream in the mid-19th century forced us into a cultural and geographical isolation that we’ve been fighting for more than a century, and now, our peculiar language is spoken by millions across the world. Yet, as the church has expanded, we find ourselves coming up against the problems of individuality and of experience in ways that question our inclusiveness, and our willingness to compromise with the outside world. It is no wonder, perhaps, in the face of an increasingly global and non-English-speaking church, that our General Conference talks have become so broad in their message and their choice of anecdotes that we might as well be listening to readings of Christian pop songs. It’s egalitarian, if nothing else.

It’s also pastoral, as leaders do their best to comfort, assuage and inspire the people in their care. Moroni’s grief, King Benjamin’s stern exhortations to service, and Nephi’s long-suffering become bedtime stories, with actionable lessons and affirmations as guard against the night and against the difficulties of our inner lives. These are all very noble goals.

But maybe we should look more closely at this tendency to resort to allegory and to that fraught art-world buzzword: ‘accessibility.’ Think of Lewis on the Psalms: in their use of the most immediate images–bone, honey, graves–they rely on the easiest, most basic things that are inclined to recognize by membership in our species.

I won’t argue that we don’t need those shared expressions. We absolutely do. But the Psalms (and everything else in scripture) hold the promise of cognitive, emotional, or even aesthetic rewards, that, when drawn from a respect for the writings’ context and authors, accomplish well more than ‘making me feel better for five minutes.’

Let me put that another way. All these parables, all these attempts to relate: is it possible that, in trusting too much to the revelations of others, we are in danger of slotting the stories of our own lives, like toddlers do, into the star- and square-shaped openings in a plastic toy box?

Our own best saint, Eugene England, writing of the debate between Brigham Young and Orson Pratt over God’s omnipotence, posits:

“Godhood is not a mysterious stasis or a mere endless repetition of the same process of creating spirits and saving them. It is most attractive to us, and the best motivator to moral and religious living, when it attracts us for the same reasons the highest forms of human life attract us: learning, creating, experiencing joy and tragedy, even weeping.”

Paradoxically, maybe, it’s only in accepting that we are no one else that we train ourselves to accept everyone else. In keeping myself from reaching–irritably, as Keats would have it–for reason, or for a nice, relevant allegory, I find myself feeling more, not less, connected to the human race. My selfish wrath, then, allows me a new emotional largesse, a flexibility and a forgiveness that will, I hope, come to benefit people who aren’t myself. Let me tell you how non-judgmental I am of other people’s so-called ‘negative emotions’ lately: EXTREMELY. And maybe that’s reason enough.

But I think there’s something bigger at stake. Here, think of the person you love most: are they not more complex and more beautiful to you than any character in any story you’ve ever heard or read or watched? I like to think of that. Love that is specific, that is time-bound, that is personal and particular and historical and above all, welcoming. It’s what we owe each other, and ourselves, as holy animals.

April 4, 2012
Why Is It So Hard to Figure Out What Mormons Believe?
Next Post

April 11, 2012 Lay Clergy: The Democratic Vision of Mormonism
Recent Comments
0 | Leave a Comment
"For some reason, this article popped up in my feed just today. I can't imagine ..."
trytoseeitmyway The Women Who Enable Abusive Men
"In response to a 2012 atheist billboard I wrote the following about it saying the ..."
DisqusIMO On Mormons and Planets
"Season 4 of Fargo--where Timothy Olyphant plays the Mormon lawman Deafy and Chris Rock plays ..."
xert Mormon ‘Niceness’
"I pretty much wrote the exact same thing about my husband's "bachelor name" back in ..."
Brita Long No, I Did Not Keep My ..."
Browse Our Archives
Related posts from Peculiar People