July 10 was the 208th birthday of  Emma Hale Smith Bidamon, wife of Joseph Smith, Jr. In Kirtland, Ohio where I have worked for the past nine summers, the staff at the Community of Christ’s Kirtland Temple organize a July 10th hymn festival in the temple that celebrates Emma’s life. 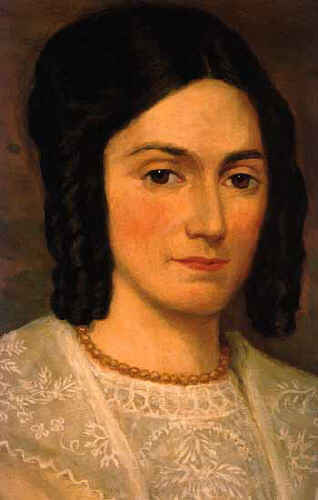 Since the first hymn festival in 2004, three Mormon traditions with a presence in Kirtland participate each year—the relatively conservative Church of Jesus Christ of Latter-day Saints (LDS); the moderately liberal Community of Christ (formerly called the Reorganized Church of Jesus Christ of Latter Day Saints, or RLDS); and members of the independent Restoration Branches movement (a conservative group that broke away from the RLDS church in the 1980s over women’s ordination). What happens, then, when an LDS sister missionary, a Community of Christ historian, and a Restorationist elder all walk into a temple? Miscommunication. And this is actually a good thing.

During a hymn festival at which I was the piano accompanist in 2011, members from the Community of Christ temple staff and the LDS missionaries from Historic Kirtland, as well as local Restorationists and members of LDS bus tours, read various parts of a biographical script about Emma’s life. Members from various traditions also participated in the music, beyond the mass congregational hymns. Perched in one of the four choir lofts in the temple, the LDS sister missionaries from Historic Kirtland sang a common hymn from the three traditions, “Redeemer of Israel.” The sisters beamed as they sang the piece, complete with a soaring descant. The less musically inclined Kirtland Temple staff (I among them) struggled to sing an RLDS hymn written by two of Emma Smith’s granddaughters. The festival ended with the gathered congregation standing and singing “The Spirit of God Like a Fire is Burning” followed by a benedictory prayer by the young associate pastor of the Kirtland Restoration Branch. The congregation then was dismissed, with sisters and Community of Christ staff milling around for sometime after the service, chatting and congratulating one another on a job well done.

How do people in the seemingly harmonious gathering that I just described engage in “miscommunication”? To put it simply, the Emma Smith honored by all three traditions is not the same Emma. For many contemporary Community of Christ members, the historical Emma Smith is the foe of polygamy and the courageous voice of dissent against her husband’s excesses. Restorationists honor Emma as an opponent of plural marriage, but they add the caveat that Emma fought against Brigham Young’s polygamy. Restorationists, you see, largely deny Joseph Smith’s involvement in plural marriage and the whole Nauvoo temple cultus. For both Restorationists and Community of Christ members, though, Emma is a founding matriarch who stayed true to the faith (as they conceive it) until her death. In contrast, for many contemporary LDS, Emma is much more ambiguous figure. The dust jacket to a contemporary LDS biography of Emma epitomizes this ambiguity: “Revered as ‘an elect lady’ and denounced as a ‘damned liar,’ Emma Hale Smith had a life full of contradictions — trials and triumphs, sorrows and strength, fears and faith.” [1] One cannot imagine a publication by Deseret Book stating that Joseph Smith lived a life “full of contradictions.” As the founding matriarch who did not go West with Brigham Young, Emma, though, can elicit discomfort and a concomitant need for redemption in the contemporary LDS mythos. In short, LDS, Community of Christ, or Restorationist members claim “Emma” as their ancestor, but each group imagines a very different person. When the three religious groups come together in the Emma Smith hymn festival, though, the ritual itself creates the illusion that “Emma” is indeed a common ancestor.

So…is this a problem? Absolutely not. Ecumenical engagement among the members of the many Mormon traditions does not necessitate broad scale agreement on historical or theological beliefs. As media studies theorist John Durham Peters argues about communication more broadly, “To say that communication in the sense of shared minds is impossible is not to say that we cannot cooperate splendidly.” [6] Mormons from different traditions may “miscommunicate,” or talk past each other, in a scripted performance like the Emma Smith hymn festival. Yet by maintaining a collective fiction about a “common ancestor,” people who would not normally come together engage in satisfying forms of sharing. And, in a pluralistic religious America, miscommunication may be one of the best ways that we temporarily bridge some of our differences.

[2] John Durham Peters, Speaking into the Air: A History of the Idea of Communication (Chicago: University of Chicago Press, 1999), 29.

July 13, 2012 Everything is Spiritual
Recent Comments
0 | Leave a Comment
"For some reason, this article popped up in my feed just today. I can't imagine ..."
trytoseeitmyway The Women Who Enable Abusive Men
"In response to a 2012 atheist billboard I wrote the following about it saying the ..."
DisqusIMO On Mormons and Planets
"Season 4 of Fargo--where Timothy Olyphant plays the Mormon lawman Deafy and Chris Rock plays ..."
xert Mormon ‘Niceness’
"I pretty much wrote the exact same thing about my husband's "bachelor name" back in ..."
Brita Long No, I Did Not Keep My ..."
Browse Our Archives
Related posts from Peculiar People