Mormonism, Interfaith Marriage, and the Practice of Pluralism

Behold, I say unto you that all old covenants have I caused to be done away in this thing; and this is a new and an everlasting covenant, even that which was from the beginning. (D&C 22:1) 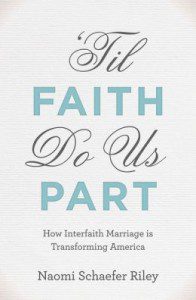 As America continues to navigate the intended and unintended consequences of pluralism, interfaith marriage has become a significant arena of interest. This week, Stanley Fish highlighted Naomi Schaefer Riley’s new and provocative ‘Til Faith Do Us Part: How Interfaith Marriage is Transforming America. In the last decade, nearly half of all American marriages involved individuals of different faiths. On the one hand, such a statistic both reaffirms and perpetuates the nation’s increasingly pluralist tradition: besides demonstrating the extent to which individuals have become tolerant of other faiths, interfaith marriages also ensure that the succeeding generation(s) will come to accept religious diversity as commonplace. Richard Putnam and David Campbell’s American Grace persuasively argued that America’s, well, grace is found in the nation’s increasing exposure to and acceptance of religious pluralism, largely through building a network of kinship and friendship with those outside one’s own faith.

But Riley, herself part of an interfaith marriage, does not only focus on the benefits of pluralist matrimony. Indeed, much of her book explores the problems and hurdles such unions face. Besides the practical issues—how to celebrate holidays or worship on Sundays, for instance—those who enter interfaith marriages often underestimate how much of their worldview is shaped by their religious heritage. It turns out working out the kinks of tolerance is tougher than expected, especially within the home.

And what faith tradition, in Riley’s extensive research, claimed the most people hesitant to enter into interfaith marriages? The Church of Jesus Christ of Latter-day Saints. Which, of course, shouldn’t come as a surprise: Mormonism claims a long history and deep theology that has made this kind of thing expected.

Starting in Nauvoo during the early 1840s, Mormons understood marriage rituals in a distinct way. Rather than merely a civil union granted by the state and sanctioned by the Church, Joseph Smith sacralized marriage as a necessary covenant and made it a mandatory religious rite; more than a union of love, it was the required ticket to the highest order of salvation. (This understanding of marriage as a primarily religious function has shaped Mormon political discourse on marriage to the present day.) Proper marriage required proper authority, and that authorization was not only dependent on ecclesiastical approval but also only available to worthy members of the faith. Just like the status of baptism for those previously baptized in other faiths, members whose marriage was sanctioned by non-Mormon clergy were required to repeat their nuptial in the LDS temple. From that point on, most Mormon youth understood a temple “sealing” to be their primary goal and life’s true purpose, which meant marriage only with those who share their views and faith.

Coupled with this theological impulse was a tradition of cultural separateness. Internal circumstances and external pressure in the nineteenth century forged an identity centered on otherness; some went so far to even posit a unique Mormon ethnicity. Even after the “gathering” ceased and LDS membership spread across the globe, Mormon insularity remained. Frequent church activities for average members, institutes as centers of socializing for young adults, singles wards maximizing dating potential, and Mormonism’s generally proud tradition of embracing their own have made strong congregational bonds, but also limited external engagement. Indeed, Putnam and Campbell’s extensive research revealed Mormons to be among the least likely people to have close friends outside their own faith, a status that had negative social consequences within the authors’ thesis. It makes sense, then, even when theology is set aside, that Mormons look within their own “tribe” for someone to perpetuate their cultural activities.

Mormonism rightly plays a major role in Riley’s book because LDS members often embody the tensions she wishes to tease out: not only does the faith’s theology shape their view of both family in particular and life in general, but the cultural traditions of those raised within the faith sometimes make interfaith relationships difficult. A religion that frames one’s worldview and demands so much participation and allegiance often makes compromises and bargaining, the key ingredients in an interfaith marriage, a tough sell; partners are often left to choose their allegiance between their spouse or their Church. This leads not only to more difficulty for Mormons who are in an interfaith marriage, but it leads to a much smaller number of Mormons entering into an interfaith marriage in the first place.

Further, while there are obvious benefits to Mormonism’s emphasis on temple marriages, particularly the preservation of the faith’s tradition from one generation to the next, there are side effects that can at times be painful and unfortunate. For one, there often exists a tenuous position for those who do not match the Church’s family ideal, and singles, single parents, or mixed-faith families struggle to find a stable and validating position within the peripheries of Mormon culture. But perhaps just as significantly, the lack of interfaith marriages often maintains barriers between LDS members and other faiths and evades the benefits of America’s practice of pluralism—the practice that, if sociologists are correct, has led to greater religious tolerance and civic stability. In Putnam and Campbell’s research, again, they found that those faiths that gained greater integration into the nation’s mixed society have driven societal balance and strength. (Not to mention theology: those who had more friends outside their faith were much more likely to have a more inclusive view of heaven.) Interfaith marriage is perhaps the most tangible example of the practice of pluralism by not only expanding one’s exposure to another’s beliefs but also introducing a broader network of kin outside of one’s faith borders.

Mormonism and, more specifically, individual Mormons entering into—or not entering into—interfaith marriages posit a poignant example of the tensions of religious pluralism within American religion. Can a faith tradition with strong truth claims and a seemingly exclusive understanding of marriage avoid the pitfalls of separatism and tribalism? Such tensions embody the paradoxical union of religion and, well, religious liberty.

March 28, 2013
A Couple Knots with Mormon Women and the Priesthood
Next Post

How Interspirituality Informs My Attempts to Be Compassionate
Compassion has been at the heart of my interspiritual attempts for years....
view all Latter-day Saint blogs
What Are Your Thoughts?leave a comment