“Toxic Religion”? The Parable of the Pan

“Toxic Religion”? The Parable of the Pan November 17, 2014 Melissa Inouye 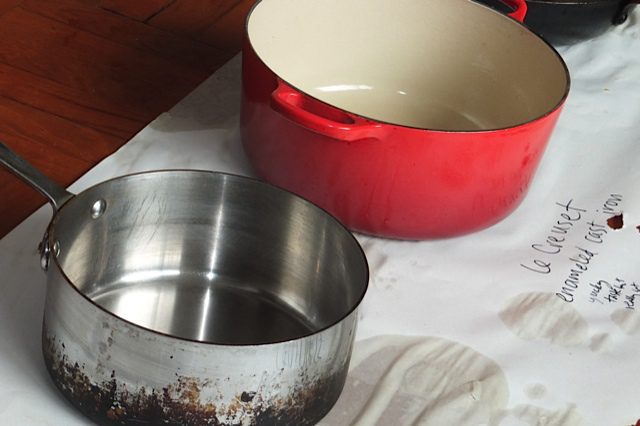 There are “winners and losers” in the wake of the acknowledgment by The Church of Jesus Christ of Latter-day Saints that its founder, Joseph Smith, practiced polygamy [and in the subsequent media coverage] . The church itself is a clear winner. This step in the direction of transparency signals Mormonism’s maturity and adaptability in the twenty-first century. The acknowledgment is also vindicating for Mormon intellectuals who have worked hard to promulgate a nuanced narrative of Mormon history that avoids the extremes of demonization on one hand and whitewashing on the other.

In spite of these gains, however, there is also a sense of real loss among Mormons who are used to thinking of Joseph Smith as a man beyond reproach. Even if one accepts the premise that Smith’s polygamous marriages were in obedience to divine command, to learn for the first time that Smith concealed some of his additional marriages from his wife, Emma, for whom his polygamy was “an excruciating ordeal”, is jarring. Given Mormonism’s current emphasis on strengthening family relationships, especially trust and fidelity within marriage, the thought that such deceptive behavior could have played any part in Mormonism’s founding story is a bitter pill indeed.

The taste of religious disillusion is not a secret Mormon recipe but is in fact shared among many believers and former believers of various “organized” religious traditions. The institutionalization of the divine is a bold but fraught undertaking, conspicuously vulnerable to human error. I recall the struggles of a Catholic friend in Boston during the clerical abuse scandals of 2003 and the detachment of a friend in Auckland looking back on her former evangelical zeal.

I first tasted this bitterness myself many years ago, as a student at Harvard College.

A few months ago, I tasted it again when I boiled sodium bicarbonate in my favorite saucepan. Let’s call it the Parable of the Pan, or Is Your Cookware Toxic?

The Parable of the Pan

I found a website that stated that every kind of commonly used cookware was in fact hazardous. It suggested a home “toxicity test” that involved boiling 1 tablespoon of sodium bicarbonate (baking soda) in 1 cup of water in a pan for 5 minutes and then tasting it to see if any metals had leached into the water. For comparison, the taste of the “cooking-pan” water could be compared to the taste of 1 tablespoon of baking soda simply dissolved into hot water.

I went ahead with the test, using my favorite saucepan. After just five minutes, the water that had been boiled with baking soda had a suspicious tint. I first tasted the dissolved mixture to get a baseline: salty, but clean-tasting. Then I tasted the pan-water.

Phlegh! I spat it out. It tasted like a dirty bike chain.

I was shocked and disgusted. The trusty stainless steel pan that I’d been using for years was actually leaching toxic chemicals! We could never use this toxic pan again. I chucked it in the trash.

Then further suspicions crept into my mind. What about the rest of our cookware? The stockpot, the sauté pan, the enameled cast iron Dutch oven? Were they, too, leaching heavy metals into our pasta sauce?

I conducted the test with each kind of cookware in our cabinet and laid them all out on the living room floor for a family taste test. I placed spitting receptacles at strategic intervals. 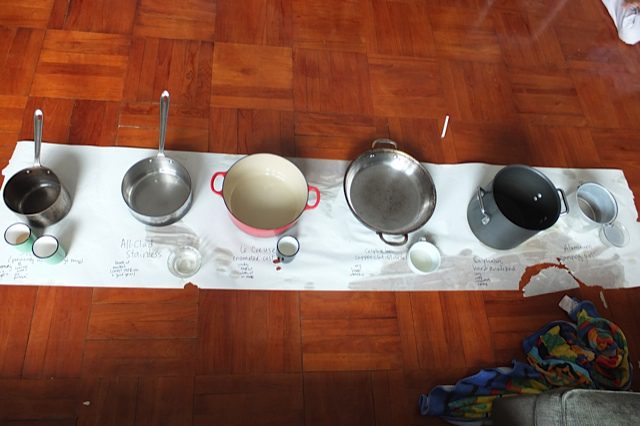 Even now, just recalling this taste test is provoking a physical response in my body. My mouth is watering in an attempt to defensively dilute the harsh, bitter tastes best described as “Scraped Nails”, “Industrial Solvent”, and “Magnet Tea”. From enameled cast iron to hard anodized aluminum, the taste of the water boiled in these pans varied slightly but was overwhelmingly nasty. After the taste test we all rinsed our mouths several times. Despite these efforts, the bitter taste stayed in my mouth for the rest of the day.

What was I to do with these “toxic” pots? I considered throwing them all away. But then what? Would I put the whole family on a raw food diet of oranges, lettuce, and sprouted lentils? Would I sizzle sausages on a stone slab? Returning to the website that had recommended the “toxicity test” in the first place, I saw that this website sold [very expensive] titanium pans, which, unsurprisingly, did not react with sodium bicarbonate.

In the end, I thought: stir-fried veggies are good. I kept them all.

Let those with buds to taste, taste.

The metallic bitterness that I tasted in The Parable of the Pan is not unlike the my first taste of disillusion upon first encountering Joseph Smith not as a handsome, infallible superhero, but as a charismatic, complicated human being. One of my first reactions was to consider giving up Mormonism altogether and either becoming a Quaker or going off to harvest my own spirituality in the wild. But as I studied more about Mormon history and about religious history from Buddhism to Pentecostalism, I gradually realized that flawed, human elements are an integral part of all major religious movements. If you want to cook your food, the fundamental reality that you will have to accept is that cooking pans are made in factories of alloys of nickel and chromium.

Organized religion is like that pan. Religious traditions provide the discursive and logistical vessels of communal religious experience. To be sure, these “divine vessels” can be so jarringly human in both their materials and the methods by which they were made. One does not simply pluck a Torah off a tree or peel a fresh-picked Communion. The maintenance of any distinctive tradition involves hardware, assembly lines, and the work of many hands. With this flawed human composition, is it any wonder that under certain [shockingly commonplace] circumstances, a bitter taste can leach out? And yet these human alloys form tools for making good things.

I can’t speak for my friends whose experiences with religion have left them with a persistent bitter taste in their mouths. Nor, in the scope of this short piece, can I explain my experience of the divine within Mormonism. But the Parable of the Pan suggests that when it comes to religion, being a pragmatist has its hazards but being a purist can mean missing out on a lot.

For myself, wrestling with uncomfortable aspects of my faith’s history and administration is a liability I’m willing to accept, though it is sometimes bitter work. Through my faith, I’ve stood in holy places with people I love—people who have taught my children to want to be kind, people in whose service I have set up chairs and preached sermons, people who have known my faults and forgiven me. Despite the loftiness of the divine aspirations that have inspired religious movements throughout history, it is the humanness of the project that is both most problematic and most inspiring. 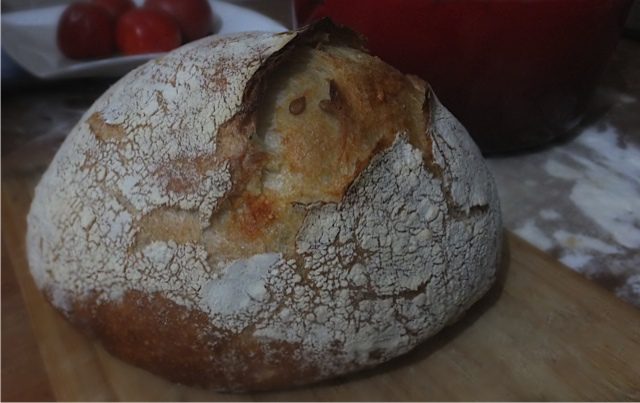 December 1, 2014 The Liberal Soul, by Richard Davis
Recent Comments
0 | Leave a Comment
Browse Our Archives
get the latest from
Latter-day Saint
Sign up for our newsletter
Related posts from Peculiar People