The 5 Best References to Mormonism in the History of Television

The 5 Best References to Mormonism in the History of Television October 16, 2015 J. Paul Valley

So that Quantico show debuted a little while back. It’s a show about FBI agents and stuff that critics seem to generally like, but Mormons are generally nervous about. Apparently there’s a steamy hot Mormon hunk in the first episode who doesn’t really make it to the second episode and there was a lot of anxiety over this because I guess his temple garments were visible in one scene (but less visible than originally intended, or something?).  Also, from what I gather the Mormon dude turns out to be an awful person which is a big fat Mormon bummer.

In fact, ABC apparently got the memo that Mormons were on edge about the whole thing, because they issued this kind of bizarre disclaimer before the first episode here in Utah.

Anyway, Jim Bennett over at The Deseret News wasn’t a huge fan of the whole ordeal. Called it “a sleazy, by-the-numbers procedural/soap opera teeming with impossibly beautiful millennials.”

I haven’t seen it and I probably won’t so I’m not super interested in actually judging its quality, but HEY!!! this is a great time to dust off the old “best Mormon references on TV” list.

So here, I present to you the five greatest Mormon moments in television history, because Mormons and TV shows are celestially bound together for eternity (the TV was invented by  Mormon, you know). This list is not doctrine, but it’s certainly a cultural teaching that should be viewed as authoritative.

This is probably the most classic reference to The Church of Jesus Christ of Latter-day Saints to ever grace the small screen. It’s brief and funny without being legitimately rude. It’s also now a meme, which gives it a major boost in the reference-o-meter. The only reason it doesn’t score higher is because of its ubiquity. It’s kind of the standard go-to for Mormon television references. So it’s cool factor is slightly diminished.

What’s so great about this is how long the set up for the joke is. It really pays off, too. Family Ties was a great show. Michael J. Fox, charming as always. A solid recipe for a good ‘ol fashioned word mixup.

Since I can’t find the clip on the Internet, I’ll just give a quick breakdown. Basically, Alex (Michael J. Fox) gives his little sister, Jennifer, some dating advice, and in the process explains that boys are “helpless victims to the hormones.” You can see that scene below.

Later, Jennifer is at dinner with the boy she was talking to Alex about and she gets frustrated with his behavior, so she has a verbal burst that mixes up the word “hormones” with “Mormons.” So he’s got Mormons coursing through his veins. The only thing that’s a little weak here is that Mormons are only referenced as a word, not as a people. But it’s a pretty great set up for a joke, so kudos to them.

I know, I know. South Park has entire episode devoted exclusively to jokes about Mormons. But the reality is, I just think this reference is funnier. They poke fun at the absurdity of getting to the other side, only to discover that the religion you chose wasn’t quite the right one so you are now condemned to Hell for eternity. It also pokes fun at how Mormons are believed by some to be one of the few Christian sects that won’t be going to Heaven. It’s just a great joke.

The look on Frasier’s face after he realizes that the guy he hired to do his dirty work (his agent) is a Mormon is just great television. There’s also this great scene where his new agent apologizes for being late because he hit some animal with his car on the way over and he had to stop and give it a proper burial. It’s a great caricature.

#1. Cheers: “With some people you just can’t discuss religion.”

Everything about this joke is perfect and wonderful. Frankly I’m honored that one of the greatest shows ever to be on television used my religion for a wonderfully executed verbal gag.

I don’t understand this scene because I’ve never seen this episode. But I came across while I was searching for other videos and it intrigues me. Who is the Mormon guy in this video? Why is House being a jerk to him? Is “the book” he’s referencing The Book of Mormon? Also, what did House do after the punch? 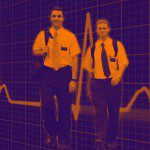 October 15, 2015
What Should We Take Away From Slate's Missionary Health Article?
Next Post

October 19, 2015 Scandal on the Mormon Ranch
Recent Comments
0 | Leave a Comment
Browse Our Archives
get the latest from
Latter-day Saint
Sign up for our newsletter
Related posts from Peculiar People