Drawing dragons got me seriously thinking about evolution for the first time.

My earlier attempts at drawing had almost all been tracing, but I found none of the images of dragons I found satisfactory. What was more unfortunate was that dragons didn’t exist (spoiler), so I had no reference photos. Consequently, I had to break them down into their component parts. For the first time in my life, I found myself studying bones and muscles.

I not only studied how my own muscles expanded and contracted with body movement, but also those of animals, which had never before caught my eye. Dragons required me to compile a staggering variety of anatomical sources–horses, lizards, dinosaurs, bulls, bats, birds, antelope. As I examined the breadth of vertebrate life, I had what seemed a revelation: we all had the same basic skeleton and musculature. Dogs had knees (up by their bodies) and ankles (lifted off the ground). Horses’ “hands” and “feet,” yes, consisted of a single toe apiece, but there was that same underlying form again: shoulderblades floating on ligaments alongside the ribcage, joints bending in the same direction relative to each other. Humans had the remnants of a tail. Even whales had vestigial fingers within their flippers. Just as we might be able to spot a father’s nose or a mother’s eyes in a child, I suddenly saw that all vertebrates, at least, shared a common ancestry.

All because I wanted to draw dragons.

Thus Steven Peck’s blending of the fantastic, the imaginary, and the science of life in his book Evolving Faith seemed utterly natural to me. George Handley states in the foreword that Peck’s “practice of creative thinking helps to protect himself against staid, stale, or borrowed thinking.” This is indubitable. In Evolving Faith, the same neurons that have colluded to give us a truly harrowing vision of eternity (A Short Stay in Hell); far-future saints on Mars grappling with authority, sacred narrative, and war (“Let the Mountains Tremble, for Adoniha is Fallen”); and a interpolated tale of man’s working of God’s miracles (“The Gift of the King’s Jeweler”) survey the theological and scientific landscapes, charting them for the lay reader and pointing out some particularly engaging vistas.

Perhaps the best feature of this book is something it entirely omits: arguments over the scientific evidence supporting evolution. Nowhere does Peck engage so-called flood geologists or Young Earth Creationists, let alone Mormons who might still argue that dinosaur bones came from planets whose detritus formed parts of the “matter unorganized” out of which Earth was fashioned. The closest he gets is in the first chapter, in which he explains the scientific method beyond what the average reader learned in high school and warns against literalistic reading of scripture. (He quips, “Literalism is like giving a child a calculus book as a step stool to reach a washbasin.”) Throughout the entire book, Peck simply assumes that evolution is the means by which life developed on Earth and explores the theological and philosophical implications of that assumption, thus entering virtually uncharted and hence uniquely productive territory for LDS theology (see page 47).

The second chapter is a prime example of this pattern, exploring the meaning of randomness and contingency in the philosophy of evolution. (How I wish I could have written this chapter–and how glad I am that Peck has written it!) Peck explains how evolutionary randomness is conditioned by “adaptive landscapes” that favor certain mutations over others. What defines the contours of the adaptive landscape could be a deity (providing room for “design” without a deity’s intervention in biological processes) or simply other contingent and random events in the planet’s history; living within the system, we cannot find an answer through science. One small criticism here: the book would have been well served by visual aids to explain Richard Dawkin’s “Mount Improbable” and three-dimensional adaptive landscapes to those who might have trouble picturing these and, subsequently, understanding much of the chapter.

Other chapters in the first half of the book–all essays that Peck has published or presented in academic contexts–take on theology, philosophy of consciousness, and tendencies common to evolutionary processes. Chapter Three outlines how other Christian faiths have dealt with evolution in their theologies, explicates the difficulties in importing those theologies into Mormonism with its vastly different ontology of God, presents several Mormon approaches to questions of embodiment and evil, and highlights what I find to be the biggest problem for Mormonism when dealing with evolution: the assumption that the human form is the inevitable or perfect result of the evolutionary process. Chapter Four was my go-to resource when someone asked me how Mormonism reconciles a decision-making spirit–supposedly with a consistent, preexistent personality–with the fragility and mutability of the human brain. This question becomes even more pressing when Peck relates, in Chapter Ten, the story of a bacterial infection that gave him vivid hallucinations in which he believed utterly and which, apparently, expunged his belief in God until it was defeated by antibiotics.

For the sake of brevity, I cannot address each of the remaining chapter and will reserve words for a few. For one, Peck’s sixth chapter should have been part of the curriculum of the animal theology and ethics course I took in graduate school. As a result of this class and its depiction of America’s meat industry, I decided to become vegetarian (with exceptions for social situations and restaurants). Peck, however, argues that considering death and killing to be unnatural is a pretense by which we believe ourselves, erroneously, to be on a “higher plane than the predators of the earth.” He strikingly notes that humans “have no direct access to the sun’s energy itself, so we must take it”–through death–”from those who do”–plants and other animals. We should maintain rituals of death, Peck argues, and might even have an obligation to consider meat-eating a part of human existence. Yet he does not defend unchecked carnivorism. Instead, he suggests that greater exposure to death–and not just pieces of dead animals grown on factory farms and unrecognizably dressed up for our consumption–would lead us to temper our predatory tendencies and contribute to ecological sustainability.

Another chapter is a very short story about how Noah’s family covers God’s tracks after the flood. It’s fantastic satire.

Peck’s book is an invaluable work for Mormonism today. In part its significance is due to the public intellectual contributions it makes: to my knowledge, it is the first book that seeks to place Mormon theology in conversation with evolutionary and ecological science for a non-academic audience. Mormon academia has a tendency to exclude all but the historical from consideration, prompting unprecedented levels of engagement with documentation and debate about the minutiae of the past. That this happens in the age of fact checkers is natural. Yet Book of Mormon historicity, polygamy, and seerstones do not exhaust the catalysts of faith crises among us. Ignoring academic studies of the Bible leaves us without experience grappling with its humanness; likewise, refusing to engage with science while signaling a partnership with cultural conservatives telegraphs an incorrect message that science and Mormonism are incompatible. I can think of few better ways to begin to rectify this problem than Peck’s book. Unless he’s invited to read a chapter at General Conference. That would be better.

What is more, the impossibility of classifying Evolving Faith gestures to another of its laudable qualities: its echo of the ethos of our faith. Like Mormonism, Peck’s book is an exercise of hope, setting aside decades of concretized debate to start building a new rhetorical vocabulary; like Mormon scripture, it transgresses genres to become more than the mere sum of its parts. If one segment of the book fails to resonate, another might. Autobiography, analysis, insight, and fable merge in a Peck’s singular, prolific mind, and we can all benefit from his labors.

You can buy the book at Amazon. 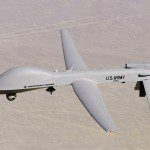 February 9, 2016
Drones and Realism in the Middle East
Next Post

February 15, 2016 Netflix's Daredevil and The Ghost of Frank Miller
Recent Comments
0 | Leave a Comment
"For some reason, this article popped up in my feed just today. I can't imagine ..."
trytoseeitmyway The Women Who Enable Abusive Men
"In response to a 2012 atheist billboard I wrote the following about it saying the ..."
DisqusIMO On Mormons and Planets
"Season 4 of Fargo--where Timothy Olyphant plays the Mormon lawman Deafy and Chris Rock plays ..."
xert Mormon ‘Niceness’
"I pretty much wrote the exact same thing about my husband's "bachelor name" back in ..."
Brita Long No, I Did Not Keep My ..."
Browse Our Archives
get the latest from
Latter-day Saint
Sign up for our newsletter
Related posts from Peculiar People