Hell and Zion: A Review of “Undertale”

Note: Undertale is a game best experienced without spoilers; I include some details below, however, in an attempt to convince the reluctant among you that it’s worth your time. 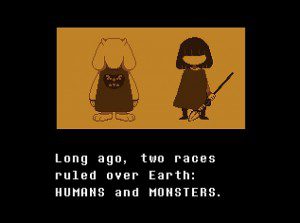 In the game Undertale, your adventure begins when you fall into the underworld—a sort of hell that turns out to be quite Mormon. [1] That is to say: it is not the typical Christian hell of punishment and torment, fire and brimstone. The underground’s inhabitants, monsters banished and trapped there by humans defeated them in an ancient war, are instead afflicted by stagnation, regret, and alienation.

Your attitude toward the characters you encounter either enhances or dispels these hellish elements. In Undertale, contrary to the norm, you need not kill anyone. Instead, if you take the time, you can find friendships and forge links between those whom you meet. The first monster you meet bakes you a pie without a hint of malice. Later, you learn that the monsters all yearn for freedom, the open air, to see the stars—their telescopes trained to their nearest approximate, glinting crystals in chamber ceilings. [2] The music in this scene transported me with C.S. Lewis’s “Joy,” that “unsatisfied desire which is itself more desirable than any other satisfaction.”

However, if you abide by longstanding role-playing game tradition and begin by killing the monsters, you confirm the validity of the monsters’ longstanding prejudice against humans as violent and vengeance-worthy beings. If you continue down that path, the chthonic world and its denizens will come to reflect your hostility. The very soundtrack will evoke the haunting, backlit ruins of a Hieronymus Bosch painting: see this track, used instead of the one linked above.

I’m not a gamer. I can’t speak to Undertale’s quality vis-a-vis other games from my personal experience. But a friend of mine has described it as a “magnum opus,” and as I’ve pondered over the past week, I can see why. Not only does Undertale obligate you to face the consequences of your actions, but it insightfully weaves mundane gaming mechanics into the narrative, plumbing the depths of what it means to play a video game. (To say more would be to spoil.) Besides, it’s a fantastic example of a beautiful story that has occupied my mind for days—and that can only be told in video game format.

While you can choose your own course, I’d recommend that in your quest to return to the surface world, you give those whom you meet give hope for a better world and help them be of one heart and one mind. Your actions can preach to spirits in prison. Anticipating physical deliverance, you can crowd out hell by gathering Zion.

[1] Fortuitously, concurrent with my playthrough of the game I was reading Alice Turner’s The History of Hell. While a book of questionable quality, it led me to contextualize Undertale alongside the Inferno and other tales of underworld journeys.

[2] Remember what Dante and Virgil first saw after emerging from Cocytus.

July 27, 2016 The Real Reason Harry Potter Helps Us Resist Donald's Hate.
Recent Comments
0 | Leave a Comment
"For some reason, this article popped up in my feed just today. I can't imagine ..."
trytoseeitmyway The Women Who Enable Abusive Men
"In response to a 2012 atheist billboard I wrote the following about it saying the ..."
DisqusIMO On Mormons and Planets
"Season 4 of Fargo--where Timothy Olyphant plays the Mormon lawman Deafy and Chris Rock plays ..."
xert Mormon ‘Niceness’
"I pretty much wrote the exact same thing about my husband's "bachelor name" back in ..."
Brita Long No, I Did Not Keep My ..."
Browse Our Archives
get the latest from
Latter-day Saint
Sign up for our newsletter
Related posts from Peculiar People