Trump: The Enemy of the Family 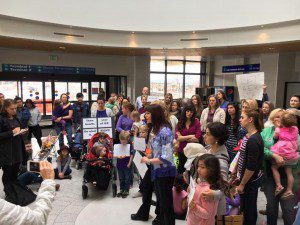 This morning Isabel, a middle-aged Mormon woman from Colombia who has lived in the US for years, left her home in Draper, Utah and was forced to board a plane bound for Colombia. ICE, acting under what they would only describe as “changed priorities,” took Isabel away from two US citizens who depend on her care. Her 18-year-old son, who is disabled and unable to care for himself (a fact that her Mormon bishop corroborated over the phone), as well as her 86-year-old mother, who is also a US citizen.

As I type, a plane is carrying Isabel to Colombia against her will, where she must live for 10 years before she will even be eligible to apply to reenter the US and care for her disabled son. Isabel has spent years working with a broken immigration system, desperately trying to get the proper paperwork that she needed in order to be guaranteed the ability to stay with her family members in the US. Family members who are themselves US citizens.

She is not one of the supposed “bad hombres” that the president vowed to deport. The president is not a tough but fair tough man. He’s not even tough. He is a common school yard bully who targets whoever is most vulnerable.

So no, Isabel is not a “bad hombre,” but she is an easy target – “low-hanging fruit,” as a statement from the group Mormon Women for Ethical Government put it. Across the country, ICE is targeting the very people who have spent years working with the immigration system. Last week, for instance, ICE arrested Green Card applicants in Lawrence, Massachusetts, at the immigration office where these applicants had shown up for appointments. In one case, they detained a prospective Green Card holder who was in the middle of an interview that would have proved the legitimacy of her marriage to a US citizen.

For me, the news in Lawrence hit close to home. Growing up as a Mormon in NH, I attended multi-congregation activities with kids from Lawrence, many of whom were first or second generation Americans. It never occurred to me to ask my friends whether the parents they depended on were documented and had federal approval to reside in the US. But there’s a good chance that some of them had family members or friends who lived in fear of ICE.

ICE has torn apart families before now, but there is no denying the shift in this organization’s priorities under the direction of the current administration, as the article on the Lawrence arrests outlines. Trump isn’t deporting gang members and drug lords – he’s deporting mothers and fathers with family members who are US citizens and who depend on them.

Why is he deporting these peaceful members of society, at the cost of tearing apart families?

I can only speculate, but one obvious reason would be the simple fact that law-abiding residents are the people who create paper trails leading straight to them, as they take the steps necessary for  to gain legal status in this country. They’re the easiest people to target. But perhaps there’s a more sinister reason: targeting the people who are in the process of trying to gain citizenship discourages others from doing the same. It encourages them instead to go under ground and prevents any number of qualified people from ever getting a green card or becoming a citizen.

Whatever the reasons of a petty, image-obsessed president, the outcome of his actions is clear: this man will go down in history books as the enemy of the family.

April 6, 2017
Trump Should Learn from Andrew Jackson: Keep Church Out of State
Next Post

April 8, 2017 Mormon Illustration and the Burden of History - 1 of 2
Recent Comments
0 | Leave a Comment
Browse Our Archives
Related posts from Peculiar People