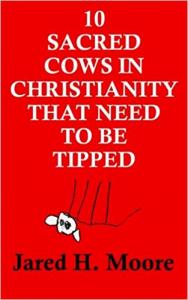 A ‘sacred cow’ in the church is a tradition that has been exalted to a position of normalcy without Biblical warrant. Sacred cows are often hard to get rid of because they are accepted and considered respectable in Christianity. They are virtually immune from criticism. The sacred cows mentioned in this book are fairly recent phenomena. These are the new traditions—the new sacred cows that are leading Christians away from obedience to God’s word. The purpose of this book is to help Christians think through the methods they use in ministry and to recognize some of these sacred cows so they may tip them over.

Some people believe that cows sleep standing up, and when pushed hard enough, they can be tipped over. “Cow tipping” in reality seems to be an urban legend. Sacred cow tipping, however, is no urban legend, and all Christians should participate.

Please join me for some sacred cow tipping!