In a small step towards a more humane society, Denmark has passed a new law forbidding the slaughter of live or non-anesthetized animals.

Muslims and Jews are angry because the ban is contrary to their religious practices. However, Denmark’s Agriculture and Food Minister Dan Jørgensen defended the government’s decision by declaring “animal rights come before religion.”

In order to be considered kosher under Jewish law or halal under Islamic law, animals must be conscious when killed. Scientists and animal rights activists consider this kind of ritual religious slaughter to be cruel and inhumane:

Research carried out by an international group of experts on the ritual in slaughterhouses confirmed that the slaughter carried out through slits to the throat and bleeding with no loss of consciousness is extremely inhumane and causes unimaginable suffering to the animal.

The new law in Denmark, which follows similar regulations in other European countries, requires animals be stunned before slaughter. It is a simple and humane requirement that minimizes the suffering of the animal. Yet apparently some Muslims and Jews will not be satisfied unless the animal suffers a slow and agonizing death in order to appease some god that does not exist. 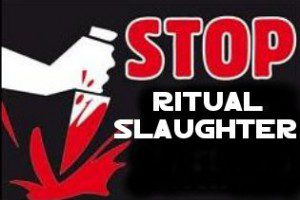