Father Lokodo claims to have several degrees in theology, and apparently considers himself to be a good Christian man defending his country from the imaginary scourge of homosexuality.

Lokodo made his abhorrent remarks while speaking to English comedian, actor, writer, presenter, and activist, Stephen Fry. The following is an excerpt from Fry recounting his conversation with Lokodo:

I actually got a Ugandan Minister to say on camera- he’s the Minister for Ethics and Integrity, it’s the only such ministry in the world. I said to him… there’s so much more to worry about in your country than the odd gay person going to bed with the other gay person. For example, you have almost an epidemic of child rape in this country, which is just frightening.

And he said “Ah, but it is the right kind of child rape.”

I said “Can you just explain what you meant?”

“Well, it is men raping girls. Which is natural.”

Lokodo recently spoke to CNN about a draconian anti-gay bill passed by the Ugandan parliament in December that would punish gay and lesbian people with lengthy prison sentences – including, in some cases, life behind bars.

Lokodo said Ugandan President Yoweri Museveni has signed the harsh anti-gay bill into law, but has not yet handed it over to parliament.

Earlier this week President Obama issued a statement saying that he is “deeply disappointed” by the decision, and noting that “enacting this legislation will complicate our valued relationship with Uganda.”

The irrational homophobia of Lokodo and other Ugandans can be directly traced back to the influence of Christian missionaries infecting generations of Ugandans with the  most obnoxious and despicable religious bigotry, hatred and misinformation.

To think that an otherwise rational human being would imply that heterosexual rape is morally superior to consensual gay sex demonstrates the toxic nature of religious fundamentalism, and the subtle yet profound moral and intellectual evil perpetrated by generations of Christian missionaries in Africa, and elsewhere. 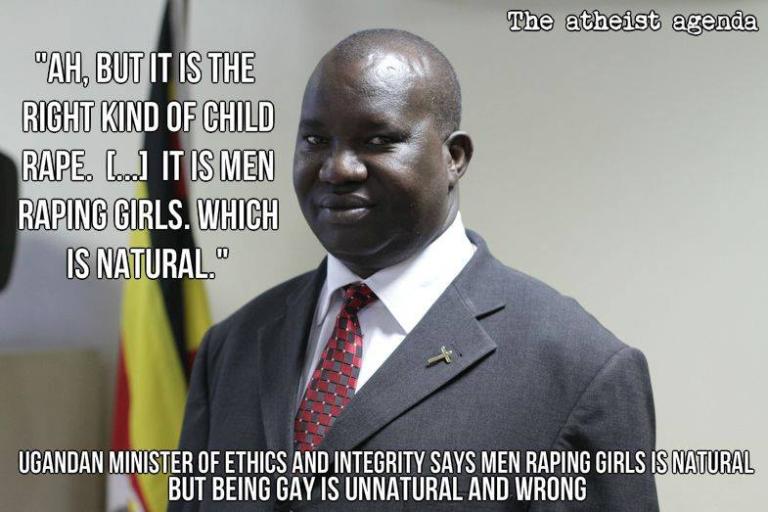