Americans are losing their faith in the Bible at a rapid rate according to the American Bible Society’s latest “State of the Bible 2014” poll.

According to the poll, young Americans in particular are less likely to view the Bible as sacred literature; less likely to believe the Bible contains everything a person needs to know to lead a meaningful life; and, more likely to never read the Bible at all.

The survey shows the number of American adults who are skeptical of the Bible grew by 10 percentage points since 2011. The shift is attributed in large part to the growing doubts of the millennial generation and Generation X.

The poll also shows that only 79 percent of Americans believe the Bible is sacred, down from 86 percent in 2011.

According to the poll, the number of people said to be “Bible engaged” is now equal to the percentage of people who do not believe the Bible is sacred.

The number of Americans who read Scripture at least four times a week and believe that it is the inspired word of God has fallen to just under 1 in 5, according to the poll.

19 percent of Americans are “antagonistic” toward the Bible, reading it less than once per month and believing it to be a book of archaic teachings written by men, and containing nothing more than stories and advice.

The bottom line is more and more Americans are doubting the infallibility of the Bible. This is good news for secular Americans and other reasonable people. 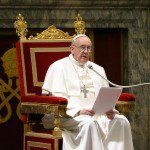 April 12, 2014
Sorry Francis, no forgiveness until pedophile priests are punished
Next Post