Geocentrism? A new documentary film narrated by Kate Mulgrew, who played Captain Kathryn Janeway on “Star Trek: Voyager,” claims the sun revolves around the Earth, and that the Earth is fixed at the center of the universe.

The film’s ultra conservative Catholic producer believes the early leaders of the Catholic Church, who interpreted the Bible to mandate an Earth-centered universe, were right after all.

The film, entitled “The Principle,” promotes “Geocentrism,”  the absurd notion that the Catholic church was right, that the Earth is at the center of the universe and it does not move, and that scientists since Galileo have got it all wrong

Geocentrism is creationism on steroids, and is often attributed to a literal reading of the Bible.

Perhaps even more disturbing than the iconic Kate Mulgrew, of Star Trek: Voyager and Orange Is the New Black, the film also features appearances by big-name scientists like Michio Kaku and Lawrence Krauss.

The new documentary was produced by Robert Sungenis, a controversial figure known to be a virulent anti-Semite and Holocaust denier. Promoting his book, “Galileo Was Wrong: The Church Was Right,: Sungenis asks, “Were the Fathers, the Medievals, our popes and cardinals of the 17th century correct in believing that the Earth, based on a face value reading of Scripture, was standing still in the center of the universe?”

April 6, 2014
The Internet: A remedy for religious superstition?
Next Post 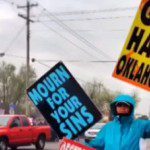 April 7, 2014 Westboro Baptist Church chased out of Oklahoma town
Recent Comments
0 | Leave a Comment
"I am called a bigot, a fool, referred to as "my kind", "nigerian white supremacist ..."
MrPeach Texas Governor: ‘The Problem is Not ..."
"you sure can run your mouth here, now explain your downvote to my harmless comment. ..."
Joshua Booker Million MAGA March: Militias, Proud Boys, ..."
"now I see why you hide your name. Some TROLL in ya=== lol!"
Brian Carnevale Texas Governor: ‘The Problem is Not ..."
"The cowardly censor at FA banned me years ago.There was an uncensored Angry Atheist channel, ..."
Pablo.Dali Fox News Host Bill Hemmer Warns ..."
Browse Our Archives
get the latest from
Progressive Secular Humanist
Sign up for our newsletter
POPULAR AT PATHEOS Nonreligious
1