Despicable and disgusting: In an unbelievable display of moral cowardice and deceit, the head of the Archdiocese of St. Louis said under oath that he wasn’t sure whether he knew if it was illegal for priests to have sex with children.

After admitting to protecting pedophile priests from prosecution, St. Louis archbishop Robert Carlson testified that he wasn’t sure whether he knew if it was illegal for priests to have sex with children when he served as chancellor of the Twin Cities archdiocese in the 1980s, according to a court transcript.

Archbishop Carlson also said under oath he couldn’t recall how he handled allegations of abuse against a Minnesota priest years ago. But Carlson did admit he never went to authorities after finding out a priest engaged in criminal sexual conduct with a minor.

Carlson was deposed last month in a case against the Archdiocese of St. Paul and Minneapolis, where Carlson investigated allegations of abuse from 1979 to 1994.

During the deposition taken last month, attorney Jeff Anderson asked Carlson whether he knew it was a crime for an adult to engage in sex with a child.

“I’m not sure whether I knew it was a crime or not,” Carlson replied. “I understand today it’s a crime.”

Anderson went on to ask Carlson whether he knew in 1984, when he was an auxiliary bishop in the Archdiocese of St. Paul and Minneapolis, that it was crime for a priest to engage in sex with a child.

Documents show that Carlson made a conscious choice to protect accused sex offenders and conceal crimes. Anderson says Carlson uses the words “I don’t remember” 193 times under oath when asked of his knowledge of cases of child sex abuse in the church.

Carlson left Minnesota in 1994 and served as bishop in Sioux Falls, S.D., and Saginaw, Mich., before becoming St. Louis archbishop in 2009.

In response to questions Monday, the St. Louis Archdiocese released a statement that said “while not being able to recall his knowledge of the law exactly as it was many decades ago, the Archbishop did make clear that he knows child sex abuse is a crime today.” The statement also said Carlson’s “moral stance on the sin of pedophilia” is “that it is a most egregious offense.”

The Archbishop’s claim that he did not know it was a crime for a priest to rape a child is unbelievable. The fact that the Catholic church continues to stand by this moral monster is predictable.

June 9, 2014
Superstition and Ignorance: Three in Four Americans see Bible as Word of God
Next Post 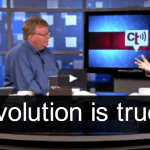 June 10, 2014 Creationists: If evolution is true, rape must be okay
Recent Comments
0 | Leave a Comment
Browse Our Archives
Follow Us!