Justin Lookadoo, a popular Christian motivational speaker with a reputation for misogyny, was arrested on charges of public intoxication earlier this week after he was found passed out and covered in vomit in his own automobile.

Lookadoo, the Christian motivational speaker who makes a living telling teenagers that “dateable girls know how to shut up,” was arrested in Indiana this week for public intoxication. Police found Lookadoo passed out in his car, which he had apparently vomited in. According to a report from local news station WFIE, Lookadoo had to miss a scheduled opportunity to dispense more bad advice at Evansville’s Teen Power Camp on account of being booked into county jail at the time.

Lookadoo failed a field sobriety test and had a recorded blood-alcohol content of .07.

Lookadoo, (aka #LookaDouche) made headlines last year after a public Texas high school was forced to apologize after allowing the Christian motivational speaker to deliver a disturbing, misogyny filled lecture on teen dating, leaving both parents and students outraged.

According to Lookadoo, “dateable girls” should “know how to shut up,” are “soft” and “gentle,” aren’t “Miss Independent,” and remember that “God made guys as leaders,” and  “Men of God are wild, not domesticated.”

On the day of his arrest Lookadoo was scheduled to speak to Christian middle school students at a Teen Power Camp on the topic of “high moral values and character for teens.” 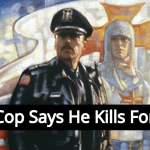 June 26, 2014
Texas cop kills for Christ, claims he is a ‘Christian Warrior’
Next Post