Tortured logic: A three-judge panel of the 2nd U.S. Circuit Court has found that “the actual purpose in displaying the Cross at Ground Zero has always been secular.”

That’s right, the court ruled the purpose of displaying a Christian symbol has always been secular.

The appeals court ruled on Monday that the memorial cross at the National September 11 Memorial and Museum in New York can remain at the newly-opened facility because the purpose of the cross is secular, not religious.

“As a matter of law, the record compels the conclusion that appellees’ actual purpose in displaying The Cross at Ground Zero has always been secular: to recount the history of the terrorist attacks of September 11, 2001, and their aftermath.”

In their decision, the judges argued:

“… a reasonable observer would view the primary effect of displaying the cross at ground zero, amid hundreds of other (mostly secular) artifacts, to be ensuring historical completeness, not promoting religion.”

One may rightly argue about the wisdom of American Atheists challenging the inclusion of the Ground Zero Cross at the National September 11 Memorial and Museum. Indeed, many atheists and other freethinkers believe it was a mistake to challenge the inclusion of the Christian symbol at the museum. However, Monday’s ruling only reinforces the notion that the courts are biased, and that Christianity enjoys a privileged status.

The Ground Zero Cross is not a symbol of hope, but a symbol of absurdity. To believe one surviving steel crossbeam from a mammoth structure composed of a multitude of steel crossbeams is a message of hope from some omnipotent god is intellectually and morally insulting. To believe a god had the interest in sending a message via a piece of wreckage, but not the desire to save the victims of the tragedy, is morally repugnant.

The absurdity of the religious superstition attached to the surviving steel crossbeam is only magnified by the court’s claim that promoting a Christian symbol is not motivated by religious concerns, but secular concerns. 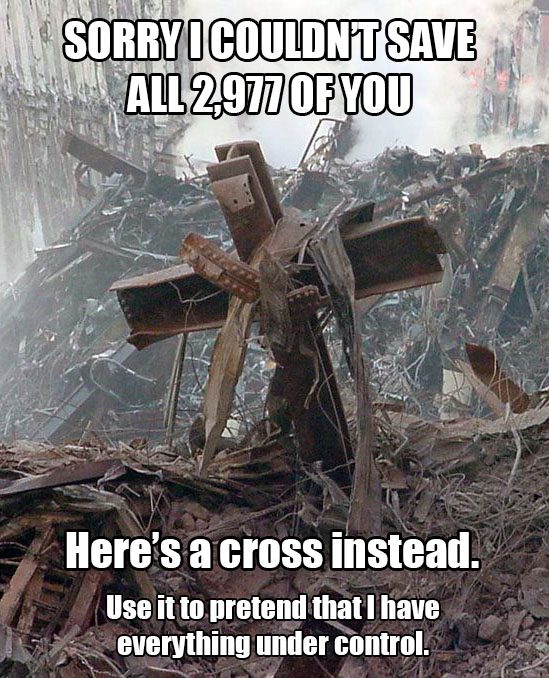