Frey, a Michele Bachmann ally, testified before the Minnesota Senate Education Committee, speaking against the inclusion of the theory of evolution in proposed state science education standards. The following is an excerpt from that testimony:

… They like to say that humans probably evolved from bacteria that lived more than four billion years ago, but that’s not what we find in the fossil record.

There’s this 16-foot tall giant was found with numerous others around the world [Frey placed a large plastic femur on the table before he started testifying].

Dinosaurs have always lived with man. Is the rock wrong or is the theory wrong? I suggest to you that the theory is wrong.

In addition, Bluestem Prairie reports that Frey used to run a group called “Creation Science Seminars,” which claimed that teaching Creationism would reduce the rate of violence while asserting that teaching the theory of evolution caused violence.

Claiming that the fossil record proves humans lived with dinosaurs is not the only questionable assertion the Republican has made. Raw Story reports that Frey continues tro make the ludicrous assertion that “AIDS was caused by sperm enzymes entering the anus of another male.”

When you have egg and sperm that meet in conception, there’s an enzyme in the front that burns through the egg. The enzyme burns through so the DNA can enter the egg.

But Frey said that it was a different story when the “sperm is deposited anally” because “it’s the enzyme that causes the immune system to fail.”

“That’s why the term is AIDS – acquired immunodeficiency syndrome,” he opined.

Earlier this year, Frey distributed a DVD that claimed an anti-bully bill was part of a plot to infect the general population with AIDS through sodomy.

The only thing more disturbing than Frey’s fallacious claims is the fact that this deeply confused man may be elected to serve in the Minnesota House of Representatives.

July 24, 2014
ISIS orders female genital mutilation for all women and girls in Iraq
Next Post 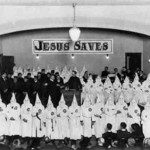 July 25, 2014 Michigan mayor compares atheists to KKK, Nazis
Recent Comments
0 | Leave a Comment
Browse Our Archives
get the latest from
Progressive Secular Humanist
Sign up for our newsletter
POPULAR AT PATHEOS Nonreligious
1

The Theological Roots of White Supremacy
There was an interesting piece on Bloomberg the other day with an...

Is Self Love Just Cheating on One's Self?
Yesterday she who I try not to mention here posted a long...

Ken Ham and the Young Earth Creationist Fear...
Ham's response makes clear how much he and others at young earth...
view all Nonreligious blogs
What Are Your Thoughts?leave a comment
Copyright 2008-2020, Patheos. All rights reserved.