Viral vitriol: Religious fanatic exposed. Social media troll and conservative darling Holly Hobby Lobby is being compared to an Islamic terrorist after posing for a picture looking like a Christian terrorist.

Holly Fisher (@HollyRFisher), aka  Holly Hobby Lobby, wants the head of liberals to explode; however, her most recent attempt is backfiring, and instead exposing the striking parallels between Islamic and Christian  extremists.

In a simple but elegant blog post entitled “Let’s hold up a mirror!” PZ Myers uses Holly’s striking selfie to illustrates the striking similarities between Christian and Islamic extremism, and the romance with religious violence both types of extremists seem to share.

Variations of images comparing the two religious extremists are winding their way across social media.

Conservatives claim the comparison is not fair, but the eyes do not deceive.

While Holly Hobby Lobby is just a social media clown out for attention, she represents a dangerous strand of Christian fundamentalism that enjoys flirting with, if not threatening, real violence.

How long until the Christian extremists stop flirting with violence and start shooting? 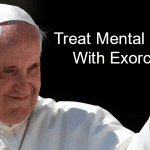 July 7, 2014 Hobby Lobby decision paves way for Christian theocracy
Recent Comments
0 | Leave a Comment
Browse Our Archives
get the latest from
Progressive Secular Humanist
Sign up for our newsletter
POPULAR AT PATHEOS Nonreligious
1