In a victory for secular Americans, the Internal Revenue Service said it will monitor churches and other houses of worship for electioneering in a settlement reached with the Freedom From Religion Foundation.

The Freedom From Religion Foundation (FFRF) and the Internal Revenue Service (IRS) reached a settlement late last week concerning an ongoing federal lawsuit over non-enforcement of restrictions on political activity by tax-exempt religious organizations and churches.

As part of their tax-exempt status, churches and other religious groups are prohibited from engaging in partisan political activity. From the IRS website:

Under the Internal Revenue Code, all section 501(c)(3) organizations are absolutely prohibited from directly or indirectly participating in, or intervening in, any political campaign on behalf of (or in opposition to) any candidate for elective public office. The prohibition applies to all campaigns including campaigns at the federal, state and local level. Violation of this prohibition may result in denial or revocation of tax-exempt status and the imposition of certain excise taxes.

However, the IRS has been negligent in enforcing their own rules for years. In their lawsuit against the IRS, the Freedom from Religion Foundation referenced a number of specific complaints, including “Pulpit Freedom Sunday” an event organized by the Christian legal group Alliance Defending Freedom (ADF) that openly flaunts the law that prohibits religious groups from engaging in partisan activities.

This is a victory, and we’re pleased with this development in which the IRS has proved to our satisfaction that it now has in place a protocol to enforce its own anti-electioneering provisions.

The bottom line: If churches want to engage in politics, they need to pay taxes like everyone else. 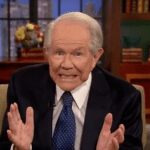 July 23, 2014 Pat Robertson on the virtues of modesty and ‘sensual laced stockings’
Recent Comments
0 | Leave a Comment
"Why is this guy so concerned with the royals? Shouldn't a good USian be strongly ..."
mordred Christian Activist Claims Meghan Markle ‘Poisoned’ ..."
""All they did was lay there and sweat" is not a legal defense against rape. ..."
duck Cardinal Pell Loses Appeal Against Conviction ..."
"Ah....I'm 74, nearly 75, and my bro is 67, and in the 60s and 70s...well, ..."
Erik1986 Alabama Senate Candidate Roy Moore Wants ..."
"  You might find this hard to believe, but it is not only extreme Christians ..."
Bob Blaylock Christian Lawmaker Wants To Jail Librarians ..."
Browse Our Archives
Follow Us!