Yazidis face genocide because ‘there is no God but Allah’

Yazidis face genocide because ‘there is no God but Allah’ August 6, 2014 Michael Stone

Islam is not a religion of peace. The Islamic State is currently engaged in a campaign of genocide against the Yazidi minority in Iraq under the banner “there is no god but Allah.”

Radical Islamist fighters captured the northern Iraqi town of Sinjar over the weekend, and in the process engaged in a campaign of unspeakable cruelty, butchering hundreds of Yazidi, and forcing tens of thousands of others to flee into the mountains in an attempt to escape the blood thirsty Muslims.

Yazidi men and boys were butchered in the streets, while the “women and girls are being used as concubines, and sold in the markets.”

In response, Iraqi and American authorities are rushing to arrange airdrops of food and water to the endangered Yazidis stranded in the Sinjar Mountains.

In addition, today, Aug. 6, the U.N. Security Council condemned the brutal attacks by the Islamic jihadists in northern Iraq, warning those responsible could face trial for crimes against humanity.

According to reports, tens of thousands of Yazidis were forced to flee the Islamic fundamentalists who took over the Iraqi town of Sinjar on August 3rd. A Yazidi elder reached by phone said they were trying to climb high enough into the nearby mountains so that members of the Islamic State would not follow.

The Yazidi (also Yezidi, Êzidî) are a Kurdish ethno-religious community, representing an ancient religion that is linked to Zoroastrianism.

The Economist reports Yazidis consider themselves a distinct ethnic and religious group from the Kurds with whom they live (and who consider them Kurdish). Their religion combines elements of Zoroastrianism with Sufi Islam and beliefs dating back to ancient Mesopotamia. However, many Muslims regard the Yazidis as devil-worshippers, and given the Yazidi belief in reincarnation, even moderate Muslims have a difficult time sympathizing with the fate of the Yazidis.

The crimes of the Islamic State, committed in the name of Islam, are becoming all too familiar. The unspeakable brutality and inhumanity of the Islamic State should serve as a potent reminder of the clear and present danger radical Islam represents to reason and human decency everywhere.

Watch as Fiyan Dakheel Yazidi, a member of the Iraqi Parliament, collapses in tears after calling upon the world to rescue the Yazidis from genocide, crying “Mr. Speaker, we are being butchered under the banner ‘There is no God but Allah.’” 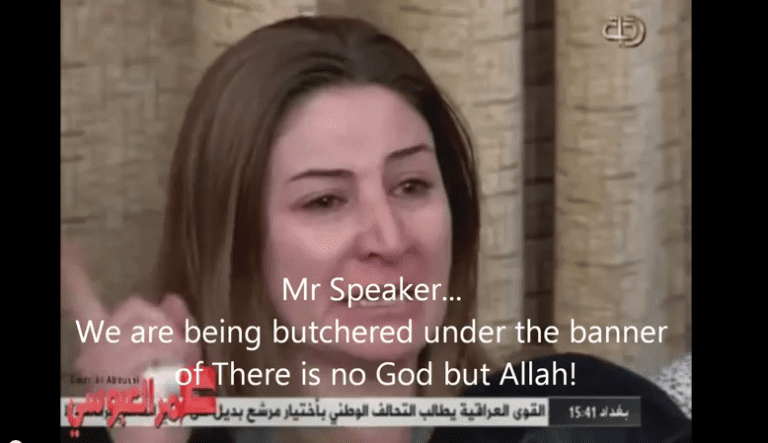 August 5, 2014
Catholics give standing ovation for priest accused of raping children
Next Post

August 6, 2014 Christian leader hopes Ebola will cure America’s problem with gays and atheists
Recent Comments
0 | Leave a Comment
Browse Our Archives
get the latest from
Progressive Secular Humanist
Sign up for our newsletter
POPULAR AT PATHEOS Nonreligious
1