Pope Francis chastises creationists, says ‘God is not a magician’

Pope Francis declares that evolution and the Big Bang theory are correct, and urges his fellow Christians to accept the truth of modern science.

Speaking to the Pontifical Academy of Sciences yesterday, Francis reasserted church teaching that the Big Bang theory and evolution can be consistent with a biblical account of creation, and that they are essential for any understanding of nature and God.

The following is an excerpt from that address:

When we read in Genesis the account of Creation, we risk imagining that God was a magician, with such a magic wand as to be able to do everything. However, it was not like that. He created beings and left them to develop according to the internal laws that He gave each one, so that they would develop, and reach their fullness. He gave autonomy to the beings of the universe at the same time that He assured them of his continual presence, giving being to every reality. And thus creation went forward for centuries and centuries, millennia and millennia until it became what we know today, in fact because God is not a demiurge or a magician, but the Creator who gives being to all entities. The beginning of the world was not the work of chaos, which owes its origin to another, but it derives directly from a Supreme Principle who creates out of love. The Big-Bang, that is placed today at the origin of the world, does not contradict the divine intervention but exacts it. The evolution in nature is not opposed to the notion of Creation, because evolution presupposes the creation of beings that evolve.

Unlike much of evangelical Protestantism in the U.S., Catholic teaching is not at odds with evolution. In 1950, Pope Pius XII proclaimed there was no opposition between evolution and Catholic doctrine. In 1996, St. John Paul II endorsed Pius’ statement.

Giovanni Bignami, a professor and president of Italy’s National Institute for Astrophysics, welcomed Francis’ comments, saying he had buried the “pseudo theories” of creationists.

Evolution and the Big Bang theory do not presuppose a creator. According to British theoretical physicist Stephen Hawking, God is not a necessary condition for the creation of the universe. According to Hawking, the Big Bang was an inevitable consequence of the laws of physics.

Hawking’s claim is a direct challenge to traditional religious beliefs like those asserted by Francis.

In his  book, “The Grand Design,” Hawking argues:

The universe can and will create itself from nothing. Spontaneous creation is the reason why there is something rather than nothing, why the universe exists, why we exist.  It is not necessary to invoke God to set the universe going.

…Because there is a law such as gravity, the universe can and will create itself from nothing.

In short, physics was the reason for the Big Bang, not God.

Yet despite the tepid efforts of Francis to reconcile scientific truth with religious superstition, many Christians will rant that Francis, and by extension all Catholics, are not real Christians, because they refuse to hold the untenable belief that God is a magician with a magic wand.

October 27, 2014
Vandal who destroyed 10 Commandments was devout Christian
Next Post 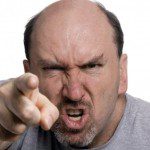