Atheism and the necessity of anti-theism for social justice

Atheism and the necessity of anti-theism for social justice November 24, 2014 Michael Stone

Seeking freedom from the tyranny of religious superstition, the atheist and the anti-theist are always on the front line in the fight for social justice and cultural transformation.

In a recent article for Salon, Reza Aslan, religious scholar, Muslim apologist, and Defender of Christ, accuses Richard Dawkins, Sam Harris, and other “New Atheists” of being anti-theists, as if being an anti-theist is a bad thing. It is not.

Aszlan suggests “anti-theism is a relatively new phenomenon.” Nothing could be further from the truth.

Historically, it has always been the atheist and the anti-theist who would risk reputation, censor, imprisonment, and even death, to speak out against the abuses and immorality carried out in the name of some god.

One need only recall the trial and execution of Socrates for corruption of the youth and impiety (a kind of anti-theism) to recognize that anti-theism has always been with the best of us.

Aslan, however, chooses to trace anti-theism back to Mao and Marx, making a craven allusion to the tired trope that atheism had some significant role to play in the horrors of Nazi Germany or communist regimes under Stalin and Mao.

For the record, Hitler and the Nazis were explicitly Christian, while Mao and Stalin both developed fascist cults of personality that deified the leader, effectively merging church and state into a de facto theocratic nightmare.

Rather than trying the tired canard of attempting to make a causal connection between atheism and the political horrors of the 20th century, a more fruitful and fair account of anti-theism would be to trace the movement through the Enlightenment, the Founding Fathers of the United States, the Golden Age of Freethought in the 19th century, and up through the so called “New Atheists.”

The brilliant Enlightenment thinker Voltaire, in a letter to Frederick II, King of Prussia, dated 5 January 1767, wrote the following about Christianity:

[Christianity] is assuredly the most ridiculous, the most absurd and the most bloody religion which has ever infected this world. Your Majesty will do the human race an eternal service by extirpating this infamous superstition… My one regret in dying is that I cannot aid you in this noble enterprise, the finest and most respectable which the human mind can point out.

All institutions of churches, whether Jewish, Christian, or Turkish, appear to me no other than human inventions, set up to terrify and enslave mankind, and monopolize power and profit.

Robert G. Ingersoll, one of the most influential thinkers from the Golden Age of Freethought, noted:

Religion can never reform mankind because religion is slavery.

And of course, the great Christopher Hitchens proclaimed:

Examples of wise and intelligent anti-theists, of men and women having the courage to take a stand and speak out against the folly and failure of religious superstition, are too numerous to list here; suffice it to say that anti-theism has a long and honorable history in the fight for social justice.

Ultimately, the distinction Aslan and others draw between anti-theism and atheism is highly problematic. There is no bright red line between atheism and anti-theism.

In fact, the difference between atheism and anti-theism is not one of kind, but of degree. Indeed, once one dares to speak the truth of atheism out loud, to say “there is no god,” or “there are no good reasons to believe in god,” one becomes an anti-theist.

To say there is no god is to be an anti-theist. As Daniel Dennett so eloquently points out:

“There is no polite way to suggest to someone that they have devoted their life to a folly.”

Aslan labels the so-called “New Atheists” as “anti-theists” in an attempt to dismiss and disparage powerful voices engaged in a global fight for social justice and cultural transformation. It is a rhetorical strategy that fails.

Perhaps most disappointing, and most disingenuous, Aslan tries to draw a moral equivalence between the anti-theist and other religious fundamentalists. It is obnoxious to reason and common sense to suggest the militant atheist is in anyway comparable to the Islamic terrorist, or the faith healing Christian fundamentalist who allows their own child to die rather than seek medical attention.

Aslan attempts to disparage so called “New Atheists” by labeling them “anti-theists.” Yet Aslan’s attempt to silence and shame the anti-theist is ultimately hypocritical. Aslan makes no such attempt to shame and silence the theist.

And the sad fact is, that because of the stigma attached to atheism and anti-theism, few question or even notice the glaring double standard Aslan deploys.

Atheists and anti-theists are often accused of being arrogant, angry, and intolerant. These accusations are little more than ad hominem attacks meant to silence criticism that threatens cherished religious superstitions.

Attacking atheists and anti-theists continues to be a popular and profitable strategy for many like Aslan who prey on the gullibility and distress of theists and others sympathetic to religious superstition.

Yet despite the attacks from the apologists for ignorance and religious superstition, the brave atheist and the brave anti-theist will continue to fight against religious tyranny, and for social justice and cultural transformation. 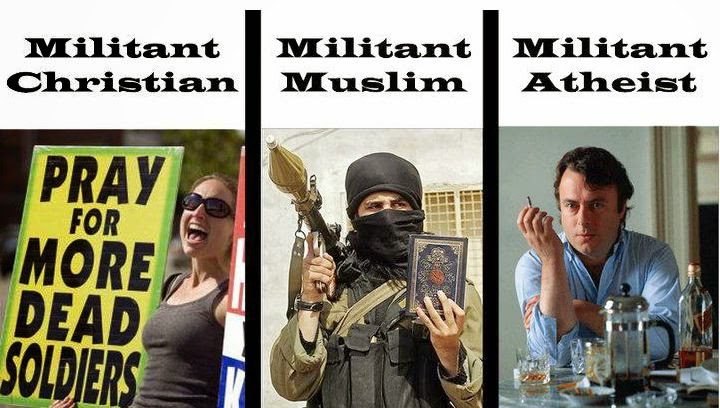 November 24, 2014 Turkish President claims women are not equal to men
Recent Comments
0 | Leave a Comment
"I was born a little over a week after President Harry S. Truman left the ..."
D.M.S. Bill Maher: ‘Magical Religious Thinking Is ..."
"While you may believe what you say, the authority on matters involving Christianity are Christian ..."
Mark Bradshaw Ana Kasparian’s Glorious Rant On Christianity ..."
"DMS, our spiritual paths aren't as divergent as you might think. Mine, however, at my ..."
Nica Bill Maher: ‘Magical Religious Thinking Is ..."
"I am quite sure that some Christian sites are capable of a relatively dispassionate review ..."
Kit Hadley-Day Ana Kasparian’s Glorious Rant On Christianity ..."
Browse Our Archives
get the latest from
Progressive Secular Humanist
Sign up for our newsletter
POPULAR AT PATHEOS Nonreligious
1