Death with dignity advocate Brittany Maynard, who announced that she would end her life this weekend, passed away on Saturday at the age of 29.

Maynard became the face of the controversial right-to-death movement, captivating millions via social media with her public decision to end her life.

‘Brittany passed away today,’ wrote the family of Maynard, a California woman who moved to Oregon after being diagnosed with terminal brain cancer in order to take her own life through Oregon’s Death with Dignity Act.

The following is a final message from Maynard, via People Magazine:

“Goodbye to all my dear friends and family that I love. Today is the day I have chosen to pass away with dignity in the face of my terminal illness, this terrible brain cancer that has taken so much from me … but would have taken so much more,” she wrote on Facebook. “The world is a beautiful place, travel has been my greatest teacher, my close friends and folks are the greatest givers. I even have a ring of support around my bed as I type … Goodbye world. Spread good energy. Pay it forward!”

Maynard, who was was diagnosed last spring with stage 4 glioblastoma brain cancer and given six months to live, had moved to Oregon with her family to take advantage of the state’s Death With Dignity Act.

“For people to argue against this choice (Death with Dignity) for sick people really seems evil to me. They try to mix it up with suicide and that’s really unfair, because there’s not a single part of me that wants to die. But I am dying.”

An obituary shared late Sunday by Compassion & Choices confirmed Maynard’s death and stated the 29-year-old “chose to live each day fully, traveled, and kept as physically active and busy as she possible could.” 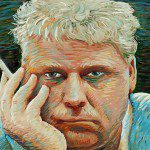 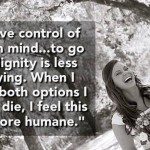 November 3, 2014 Christians claim Death with Dignity activist Brittany Maynard is in Hell
Recent Comments
0 | Leave a Comment
Browse Our Archives
get the latest from
Nonreligious
Sign up for our newsletter
POPULAR AT PATHEOS Nonreligious
1