Lawrence Krauss: Religion could disappear in a generation

Too good to be true? Renowned theoretical physicist Lawrence Krauss suggests religion could disappear in the span of a single generation.

Appearing in front of the Victorian Skeptics earlier this year, Krauss was asked what he thought about religion being taught in public schools. Krauss responded by advocating for the teaching of comparative religion.

What we need to do is present comparative religion as a bunch of interesting historical anecdotes, and show the silly reasons why they did what they did.

People say, ‘Well, religion has been around since the dawn of man. You’ll never change that.’

This issue of gay marriage, it is going to go away, because if you’re a child, a 13-year-old, they can’t understand what the issue is. It’s gone. One generation is all it takes.

So, I can tell you a generation ago people said there is no way people would allow gay marriage, and slavery — essentially — [gone in] a generation; we got rid of it.

Change is always one generation away. So if we can plant the seeds of doubt in our children, religion will go away in a generation, or at least largely go away. And that’s what I think we have an obligation to do.

Lawrence Krauss is Director of the ASU Origins Project at Arizona State University and Foundation Professor in the School of Earth and Space Exploration and the Department of Physics.

Described by Scientific American as a unique scientific “public intellectual,”  Krauss is a renowned theoretical physicist as well as one of the most well-known advocates for science  worldwide. In addition to over 300 scientific publications, He has written nine books for a general audience, including the international bestsellers The Physics of Star Trek and A Universe from Nothing: Why There Is Something Rather than Nothing.

Recently Krauss teamed up with Richard Dawkins to create the documentary The Unbelievers. 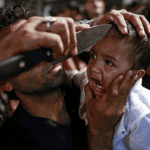 November 5, 2014 Orange Is the New Black star shuts down subway preacher
Recent Comments
0 | Leave a Comment
Browse Our Archives
get the latest from
Progressive Secular Humanist
Sign up for our newsletter
POPULAR AT PATHEOS Nonreligious
1