Driving an SUV, a Christian convert who’d been making online and in-person threats against the Muslim community ran down and killed a 15-year-old Muslim boy getting into the family car outside a mosque in Kansas City, Mo.

The victim, Abdisamad Sheikh-Hussein, was a sophomore at Staley High School in Kansas City, and a Muslim of Somali descent.

The accused attacker, Ahmed H. Aden, is charged with murder for running the teen down in his SUV. Sources described Aden as a Somali Christian: a convert from Islam to Christianity, according to local community members.

Aden, a 34-year-old Kansas City man, was charged with first-degree murder Friday in the hit-and-run killing of the 15-year-old boy who was struck down after he had just finished Thursday evening prayers at a mosque near downtown.

Aden also faces additional counts of armed criminal action, leaving the scene of an accident and unlawful use of a weapon in the death of Sheikh-Hussein.

Aden, described by sources as a Somali Christian, frequently made violent threats against worshipers at the Somali Center mosque.

Members of the Muslim community told reporters Friday that in the weeks before the crash, worshippers said they saw Aden’s black SUV painted with threatening messages at the center and cruising around a nearby shopping area.

One of the messages painted on the suspect’s SUV was “Quran is a virus disease woreste [sic] than Ebola.”

“It became pretty clear that this was not an accidental crash, there is a considerable amount of evidence that leads us to believe it was intentional.”

Police said the teen was standing outside a Toyota, about to get in, when the driver of the SUV appeared to intentionally swerve towards him. Reports indicate both of the boy’s legs were severed as a result.

Moussa Elbayoumy, the Kansas Chairman of the Council on American-Islamic Relations, said members of the targeted mosque had reported recent threats against the community posted on Facebook, and an incident in which the attacker drew a gun on Somali Muslims, to the police.

The first-degree murder charge filed Friday carries a potential sentence of life in prison without parole. Prosecutors say it is too early in the investigation to say if the death penalty may be considered.

In addition to state charges, Aden is also the target of a federal civil rights investigation. 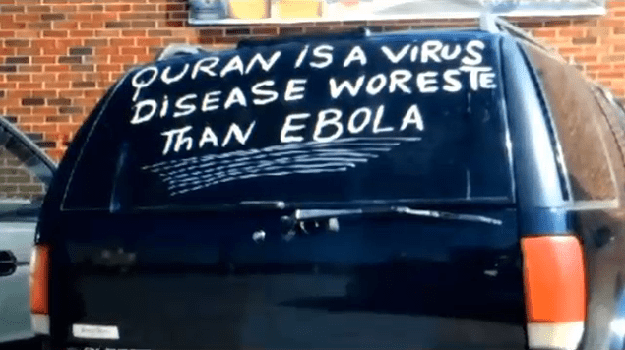