In a vicious act of theocratic cruelty, Saudi blogger Raif Badawi was publicly flogged today in front of a mosque in the city of Jeddah for the crime of insulting Islam.

Badawi received 50 lashes in a public flogging after Friday prayers today, and is scheduled to be publicly flogged with 50 lashes every Friday after prayers for the next 19 weeks. The full sentence of 1,000 lashes has been scheduled to be carried out over a period of 20 weeks. One week down – 19 weeks to go.

Last year Badawi was sentenced to 10 years in prison, 1,000 lashes and a fine of 1 million Saudi Arabian riyals (about $266,600) for creating an online forum for public debate and accusations that he insulted Islam.

…after the prayers ended Raif Badawi was removed from a bus in shackles and brought to the public square in front of the mosque. Surrounded by a crowd made up of the public and a number of security officers, he received 50 consecutive lashes on his back. The whole ordeal lasted around 15 minutes. Afterwards he was put back in the bus and taken away. 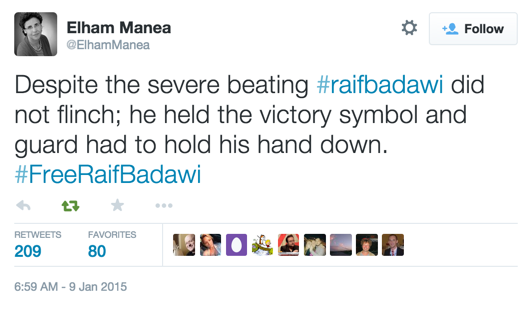 Yesterday, the U.S. State Department made a last minute plea to the Saudi government “to  cancel this brutal punishment and to review Badawi’s case and sentence.” The following is the full text of that communication via the State Department:

We are greatly concerned by reports that human rights activist Raif Badawi will start facing the inhumane punishment of a 1,000 lashes, in addition to serving a 10-year sentence in prison for exercising his rights to freedom of expression and religion. The United States Government calls on Saudi authorities to cancel this brutal punishment and to review Badawi’s case and sentence. The United States strongly opposes laws, including apostasy laws, that restrict the exercise of these freedoms, and urges all countries to uphold these rights in practice.

The flogging of Raif Badawi is a vicious act of cruelty which is prohibited under international law. By ignoring international calls to cancel the flogging Saudi Arabia’s authorities have demonstrated an abhorrent disregard for the most basic human rights principles. Raif Badawi is a prisoner of conscience; his only ‘crime’ was to exercise his right to freedom of expression by setting up a website for public discussion. He must be immediately and unconditionally released.

In their brutality, their inhumanity, and their fear of the free exchange of ideas, Saudi Arabia clearly demonstrates the moral poverty of Islam, and any theocratic system of government.

Concerned readers can Write a Letter to the Saudi Arabian authorities or Take action online. 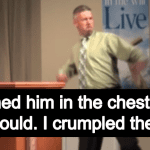 January 10, 2015 Pastor brags about punching ‘dangerously bright’ kid
Recent Comments
0 | Leave a Comment
"And JC said, starve the little chidren, for as much as you do it unto ..."
David Cromie Fox News Guest: Children Don’t Deserve ..."
""....are there no work houses....""
Erik1986 Fox News Guest: Children Don’t Deserve ..."
"Tsarist Russia was anything but a free market, and neither was the aristocratic system in ..."
Person223 Fox News Guest: Children Don’t Deserve ..."
"The right of males to reproduce, rendering a woman's reproductive organs chattel, disregarding the whole ..."
Anon E Moss New Legislation In Tennessee Would Allow ..."
Browse Our Archives
get the latest from
Nonreligious
Sign up for our newsletter
POPULAR AT PATHEOS Nonreligious
1