A father’s sexual fantasies will make his kids gay? A prominent Iranian cleric teaches that men who fantasize about other women while impregnating their wife will cause their children to be homosexual.

The Ayatollah Hossein Dehnavi is a television star and celebrity in Iran, where he offers advice on family and sexual matters. The Islamic Republic of Iran Broadcasting (IRIB) regularly airs Dehnavi pontificating on marriage, sex, child rearing, and pregnancy, while many Iranians line up and pay big money to see the leading Islamic cleric speak in person.

Dehnavi teaches that men who fantasize about other women while impregnating their wife will cause their children to be homosexual. Dehnavi claims that if a man is thinking of another woman during sex, and the sexual act results in pregnancy, “then the child will be a homosexual.”

Dehnavi also claims that the improper wearing of the hijab by a woman can also cause some men to become homosexual, stating:

Women incorrectly wearing the hijab leads to homosexuality among men.

Dehnavi also teaches that women must always submit to the sexual demands of their husband. According to Dehnavi:

Women have to provide sex to their men anywhere and at anytime.

According to Dehnavi, women should not seek sexual gratification for themselves, and are forbidden to try and “satisfy” themselves after their husband’s climax because such activity is considered a sin.

Most of Dehnavi’s advice is aimed at women. Dehnavi even advises women on wardrobe choices like the color of underwear to wear:

Dehnavi also warns women about having too much sex, advising sexual activity be limited to a maximum of “only twice a week, not every day” because “otherwise the man will become saturated.”

Dehnavi is popular with the public as well as hardliners within the conservative Iranian theocracy. Previously the Minister of Health, Marzieh Vahid Dastjerdi, honored Dehnavi with a “Better Health” award for his television work. 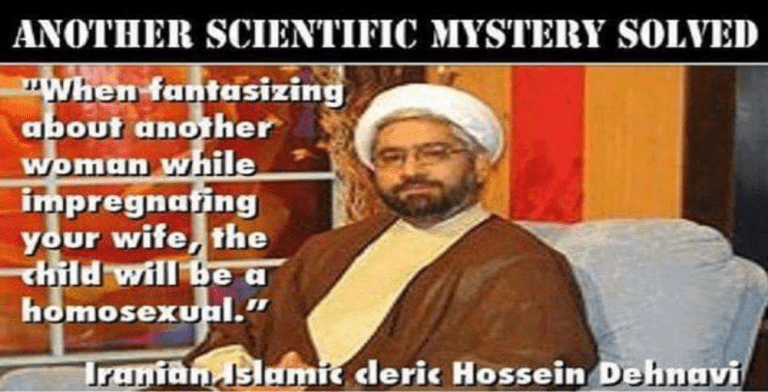 April 14, 2015 Iowa GOP official wants Christianity taught in public schools
Recent Comments
0 | Leave a Comment
"I am called a bigot, a fool, referred to as "my kind", "nigerian white supremacist ..."
MrPeach Texas Governor: ‘The Problem is Not ..."
"you sure can run your mouth here, now explain your downvote to my harmless comment. ..."
Joshua Booker Million MAGA March: Militias, Proud Boys, ..."
"now I see why you hide your name. Some TROLL in ya=== lol!"
Brian Carnevale Texas Governor: ‘The Problem is Not ..."
"The cowardly censor at FA banned me years ago.There was an uncensored Angry Atheist channel, ..."
Pablo.Dali Fox News Host Bill Hemmer Warns ..."
Browse Our Archives
get the latest from
Progressive Secular Humanist
Sign up for our newsletter
POPULAR AT PATHEOS Nonreligious
1