This is what “religious freedom” looks like: It is now illegal to discriminate against atheists in beautiful Madison, Wisconsin.

In a unanimous vote the city council amended the city’s “Equal Opportunity Ordinance” to add atheism to a long list of classes protected from discrimination, making it the first city in the country to grant explicit legal protection to people who do not believe in a God.

About amending the ordinance to protect atheists and other non-theists, Madison Alderwoman Anita Weier said:

This is important because I believe it is only fair that if we protect religion, in all its varieties, we should also protect non-religion from discrimination. It’s only fair.

Weir is correct: It’s only fair.

In a statement celebrating the secular victory,  Freedom From Religion Foundation Co-President Annie Laurie Gaylor, who also testified before the Madison city council in favor of amending the ordinance, said:

We encourage freethought activists — including the increasing number of local public officials who are atheists or agnostics — to work to introduce and replicate this protection at their city, county or even state levels.

Reporting on the new protections for atheists and other non-theists in Madison, Think Progress notes:

The new law is part of a growing movement to claim formal protection for atheists, who often face explicit or implicit discrimination for their non-belief. Although the U.S. Constitution expressly prohibits submitting candidates for office to a religious test, people who do not believe in God are currently legally barred from holding office in seven states: North Carolina, Arkansas, Maryland, Mississippi, South Carolina, Tennessee, and Texas. These statutes are, of course, unlikely to hold up in court, but atheists also face substantial hurdles at the ballot box, as a 2012 Gallup poll found that Americans are more likely to vote for Mormons, Muslims, or gay people than atheist candidates.

The amended city ordinance is good news for the citizens of Madison, and the nation. Discrimination against atheists and other freethinkers is real, and should not be tolerated in a free and open society.

By making it illegal to discriminate against atheists, the city of Madison honors the secular values upon which this nation was founded, and the true meaning of “religious freedom.” 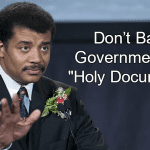 April 1, 2015 Neil DeGrasse Tyson: Don’t base government on 'holy documents'
Recent Comments
0 | Leave a Comment
"One of those medications used in treating attention deficit disorder is adderall . Adderall should ..."
leebrownmark@gmail.com Report: President Donald Trump Is An ..."
""Some of the ‘legitimate’ commenters, however, are amongst the best there are."Not buying it. Some ..."
alverant Fox News Host Bill Hemmer Warns ..."
"It’s become a bit of a magnet to RWs because Jonathan, quite deliberately, refuses to ..."
Geoff Benson Fox News Host Bill Hemmer Warns ..."
"Evil turns in upon itself."
Brianna LaPoint Pentecostal Christians Are Burning Australia’s Sacred ..."
Browse Our Archives
get the latest from
Progressive Secular Humanist
Sign up for our newsletter
POPULAR AT PATHEOS Nonreligious
1