In Paraguay, a pregnant 10-year old girl, the victim of rape and incest, is being denied an abortion because the country is dominated by the backward and morally corrupt Catholic Church.

For the Catholic Church, a fetus is sacred, but the life of a 10-year old girl is not.

According to reports, Paraguay’s health minister has refused a request from the girl and the girl’s mother to terminate the unwanted pregnancy. The girl’s mother has been imprisoned, charged with breaching her duty of care, despite the fact that the mother reported to the police that her husband was sexually abusing her daughter. Meanwhile, the girl’s stepfather, accused of rape and incest, is currently on the run from authorities.

Think Progress reports government officials, including the Paraguayan Ministry of Health, say there’s “no indication ” that the child’s health is at risk, even though medical experts agree  that very young adolescents under the age of 15 have higher risks of medical complications  during childbirth compared to adult women.

Reuters reports complications during pregnancy and childbirth are a leading cause of death for teenage girls.

In Paraguay, a country dominated by the Catholic Church, abortion is very rare, and only allowed when the mother’s life is in danger. In all other cases the procedure is a crime. However, even when the mother’s life is in danger, abortion is rarely an option because of the power of the Catholic Church to intimidate, harass, and coerce those medical professionals not infected with Catholic superstition and ignorance.

Amnesty International has been advocating for the 10-year old girl, declaring:

Failure by the Paraguayan authorities to provide a safe abortion to a 10-year-old rape survivor could have devastating consequences on her health and will heap injustice on tragedy.

The physical and psychological impact of forcing this young girl to continue with an unwanted pregnancy is tantamount to torture. The Paraguayan authorities cannot sit idly by while this young rape-survivor is forced to endure more agony and torment.

Forcing this child to carry a pregnancy to term, against her will, could have devastating health consequences.

As one might expect, the Catholic Church has weighed into the debate, saying human life is sacred and begins at the moment of conception, apparently unconcerned with the health and welfare of the 10-year old girl.

Lilian Soto, a feminist activist at the Centro de Documentacion y Estudios, said the Paraguayan judicial system had failed the girl, and put a minor’s life at risk because of religious dogma.

Soto and other activists are calling on the authorities to establish an independent medical committee to evaluate the case free from the influence of religion.

To be clear, it is the dogma, superstition, and ignorance of the Catholic Church that is responsible for the draconian abortion laws in Paraguay, and throughout South America.

Amnesty International has launched a petition  pressuring the Paraguayan government to offer this child the abortion and appropriate medical care she deserves.

May 5, 2015
Islamic Cleric Rules Marital Rape Is No Crime
Next Post 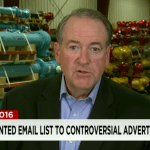 May 6, 2015 Huckster for Jesus: Huckabee caught pushing fraudulent Bible cancer cures
Recent Comments
0 | Leave a Comment
Browse Our Archives
get the latest from
Nonreligious
Sign up for our newsletter
POPULAR AT PATHEOS Nonreligious
1