The Loyal White Knights of the Ku Klux Klan will rally on the Statehouse Grounds in South Carolina next month to promote a “White Christian nation” and defend the honor of the Confederate flag.

On Monday, state officials confirmed that the Loyal White Knights of the Ku Klux Klan’s Pelham, North Carolina, chapter have reserved the Statehouse Grounds in South Carolina for a rally in front of the South Carolina Statehouse scheduled for July 18.

The Post and Courier reports the Loyal White Knights of the Ku Klux Klan, which calls itself the “largest Klan in America,” filed a permit saying they expected between 100 and 200 people to attend the event on the north side of the building, where the Confederate battle flag is currently being flown.

In a statement, South Carolina Governor Nikki Haley said the KKK was not welcome:

This is our state, and they are not welcome.

Last week, Governor Haley urged the legislature to vote to remove the Confederate flag after previously defending it.

However, despite Governor Haley’s protests, Brian Gaines, spokesman for the South Carolina Budget and Control Board, confirmed the rally, noting the state provides rally space at the Statehouse site when space is available or previously not reserved.

The KKK rally promoting a “White Christian nation” and defending the Confederate flag will take place a month after Dylann Roof entered a historic church in Charleston and shot to death nine African-Americans during a Bible study meeting last month.

The Charleston church shooting was about race, not religion. Roof, a supporter of the Confederate flag, was attempting to incite a race war, and wrote a manifesto defending the KKK and the ideals of white supremacy.

On the Klan group’s telephone answering machine a recorded message refers to Roof as a warrior.

On their website, the Loyal White Knights of the Ku Klux Klan claims Southern whites are facing “cultural genocide” while insisting they are not a “hate group.” The group insists that the KKK is all about obeying “God’s law,” and restoring “America to a White Christian nation founded on God’s word.”

The following is an excerpt:

We hate drugs, homosexuality, abortion, and race-mixing because these things go against God’s law and they are destroying all white nations. But rather than focus on hate, we try to focus on the love of our race. Love for our God and Country. Our goal is to help restore America to a White Christian nation founded on God’s word. This does not mean that we want to see anything bad happen to the darker races, we simply want to live separate from them. As GOD  intended. (Lev.20:24-25)

South Carolina lawmakers are planning to discuss removing the Confederate battle flag from the Statehouse Grounds on July 6. 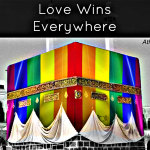