Leaving a meeting with Argentine President Cristina Fernandez on Sunday, Pope Francis asked reporters to pray for him, and then giving a nod to atheists, the pontiff joked: “and if some of you can’t pray because you are not believers, send me good vibrations.”

Reuters reports Francis always asks people to pray for him but he put a new twist on the request as he was leaving a meeting with Argentine President Cristina Fernandez on Sunday.

There Francis turned to reporters and joked in Spanish:

Pray for me, and if some of you can’t pray because you are not believers, send me good vibrations.

Yet despite his apparent good humor and sometimes liberal rhetoric, Francis has been, and continues to be, a big disappointment.

Last month, in what can only be described as a stunning bit of ironic hypocrisy, Francis, the head of a notoriously sexist institution that routinely discriminates against women, issued a call for equal treatment of women in the workplace.

Indeed, the recent moral failures of Pope Francis range from the sinister to the comical. Earlier this year a clueless Francis told an audience at St. Peter’s Square that choosing not to have children is “selfish,” apparently forgetting that he is a celibate man without children.

In February, Francis endorsed corporal punishment, a form of child abuse, making the perverse claim that parents hitting children is “beautiful” as long as the act of violence against a child is done with “dignity.”

Perhaps most disturbing, last January, commenting on the Charlie Hebdo massacre, Francis declared “one cannot make fun of faith” and that anyone who throws insults can expect a “punch,” offering a tacit justification for terror and violence in response to a cartoon making fun of religious superstition.

In short, despite the friendly facade, the occasional superficial liberal rhetoric, and a humorous joke now and then, Pope Francis is a moral failure guilty of perpetuating the institutional immorality of the Catholic Church.

As for “good vibrations,” this one’s for Pope Francis: 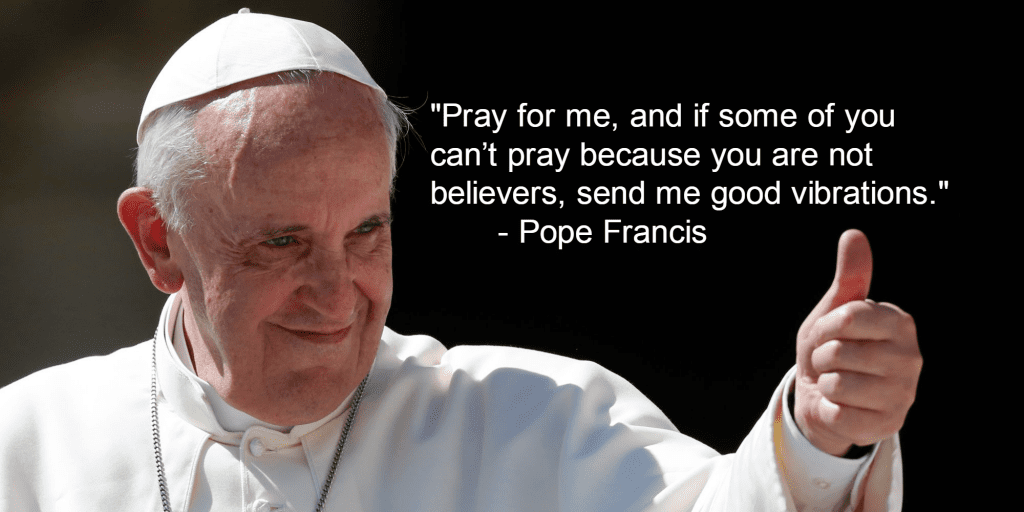