19 Victims and Counting: New details emerge concerning Josh Duggar’s sexual abuse of children, and the cover-up of his crime by parents Jim Bob and Michelle Duggar.

According to a Washington County Sheriff’s report recently obtained by In Touch magazine, Josh Duggar confessed that he was sexually molesting children, including his sisters and a family friend, to his father, Jim Bob Duggar, on at least three separate occasions.

Yet despite the the multiple confessions, and the fact that Josh’s sexually abusive and criminal behavior was continuing to grow, the Duggars waited at least 16 months before contacting authorities about their son repeatedly sexually molesting their daughters and a family friend.

The new police report reveals that Josh Duggar, now 27, began assaulting his sisters and a family friend in 2002, and that the behavior occurred multiple times, including at least one incident in March 2003.

In particular, one ugly detail emerged from the Washington County Sheriff’s report: Josh Duggar was 15 when he sexually molested his 5-year-old sister on at least seven separate occasions.

The following is an excerpt from the Washington County police report via In Touch magazine:

The report details that Josh went from sister to sister, stating, “Apparently all of the girls were sleeping in a common room at this time.”

Legal experts note that Jim Bob and Michelle could have faced six years in prison for failing to report the crime and for failing to protecting their daughters from the sexual abuse. However, the statute of limitations has expired, and it appears that neither Josh nor his parents will face criminal prosecution for their respective roles in the criminal activity.

TLC reports they have “pulled all episodes of ‘19 Kids and Counting’ currently from the air,” though the network has yet to cancel the series outright.

The Duggars are expected to address the molestation and sexual abuse that went on in their home on Fox News’ “The Kelly File”  which airs later tonight (Wednesday) at 9 p.m. ET.

Previously Jim Bob and Michelle Duggar claimed the sexual assault of their daughters by their son “brought them closer to God.”

(Readers can find more on the Duggar tragedy here) 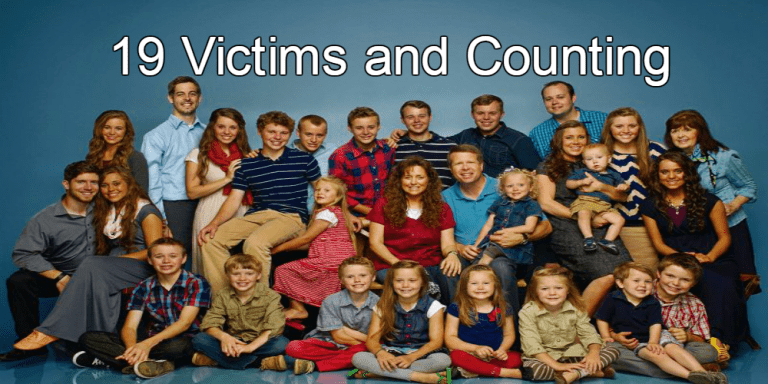 June 4, 2015 Duggars Blame Anti-Christian Media Conspiracy, Deny Josh is a Pedophile
Recent Comments
0 | Leave a Comment
Browse Our Archives
get the latest from
Nonreligious
Sign up for our newsletter
POPULAR AT PATHEOS Nonreligious
1