The Satanic Temple is being forced to unveil a new statue of Baphomet in secret after Christian terrorists threaten to “blow it up real good.”

The group had plans to unveil the 8.5-foot tall, 1.5-ton bronze statue of the Lord of Darkness, a goat-headed figure also known as a Baphomet, in Detroit on July 25. However, after threats from angry Christians, the owner of the venue scheduled to host the unveiling cancelled the event.

Because of the threats, the Satanic Temple will release the location of the unveiling on the day of the event, and details will be sent to ticket-holders only, the group’s co-founder Lucien Greaves told the Associated Press on Monday.

Tickets are going to be pre-ordered to cut down on harassment … people threatening to burn the venue down. We’ve gotten those kinds of messages.

The following exemplifies some of the threats the Satanic Temple is receiving:

“Let’s burn the statue down!”

“Better be safe the building might fall down lol”

“This Is complete bullsh*t.I can’t wait until we take this bitch down and f*ck it up. F*ck Satan!”

“I bet it would blow up real good.” 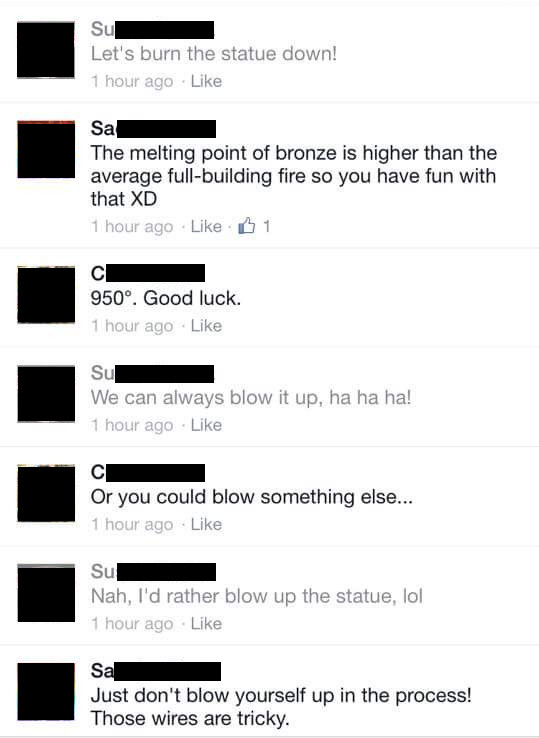 AP reports the statue was designed and built at a cost of more than $100,000 and had been planned for the state Capitol in Oklahoma City until Oklahoma’s Supreme Court banned religious displays, including a monument of the Ten Commandments, on Capitol grounds.

According to Greaves, the statue will not remain in Detroit. Instead, the Satanic Temple wants to erect it outside Arkansas’ State House in Little Rock where a Ten Commandments monument also is planned.

The following is an excerpt from an invitation advertising the unveiling event:

The Satanic Temple invites you to join us for a night of chaos, noise, and debauchery at The Unveiling, a hedonistic celebration introducing the controversial Baphomet monument accompanied by provocative performances and installations.

Never before seen in public, The Satanic Temple Baphomet monument is already the most controversial and politically charged contemporary work of art in the world. Weighing one ton and towering at nearly nine feet tall, the bronze statue is not only an unparalleled artistic triumph, but stands as a testament to plurality and the power of collective action. The event will serve as a call-to-arms from which we’ll kick off our largest fight to date in the name of individual rights to free exercise against self-serving theocrats.

Come dance with the Devil and experience history in the making.

The Satanic Temple is a group that advocates for the separation of church and state, and  describes itself as facilitating “the communication and mobilization of politically aware Satanists, secularists, and advocates for individual liberty.”