One of the Black Lives Matter activists who shut down the Bernie Sanders rally in Seattle is a self-identified “radical Christian” and former Sarah Palin supporter.

The rally at Westlake Park ended around 3 p.m. with Sanders choosing to leave after the belligerent protesters took the stage and stayed there, controlling the microphone, and hurling racist insults at the progressive crowd gathered to hear Sanders speak.

After disrupting the Sanders’ event and taking the microphone, a hostile and obnoxious Johnson accused the audience of “white supremacist liberalism” before telling the Seattle crowd:

I was going to tell Bernie how racist this city is — with all of its progressives — but you’ve already done that for me. Thank you.

As one might expect, the crowd did not take kindly to the childish insults. Perhaps even more puzzling, an obviously confused Johnson said:

If you care about Black Lives Matter, as you say you do, you will hold Bernie Sanders specifically accountable for his actions.

Apparently Johnson is unaware that Bernie Sanders was marching with Martin Luther King Jr. before she was even born.

Clearly Johnson is  a poor student of history and politics. The fact is that of all the current presidential candidates Sanders is probably the most sympathetic to the concerns expressed by the BLM movement.

However, perhaps even more damning, on her Facebook page, Johnson admits that she was a Sarah Palin supporter. This fact, the fact that she once supported Sarah Palin, is in itself indicative of poor judgement and faulty character, and provides a larger context for her more recent moral failure.

On Twitter, Johnson uses the handle LSF Thot (@rissaoftheway) and describes herself as a “Radical Christian Mullatanist.” It is not clear what is meant by “Mullatanist” although some have connected the term with “white genocide.”

Given her demeanor, it should not be surprising that Johnson is yet another unapologetic and obnoxious Christian. Earlier today she posted the following to her Facebook page as an apparent justification for the embarrassing spectacle she made of herself at the expense of Bernie Sanders and the BLM movement:

I am only as respectable as the cross.

I am only as apologetic as he cross.

I am only as concerned with worldy powers as the cross.

I am only as concerned about upward mobility as the cross.

I am only as neutral, as polite, and as comforting as the cross.

I am only as rational as the cross.

This is my offering. The Spirit convicts, directs, and affirms me.

But this shit is scandalous. That is the call of discipleship.

I live like the resurrection is coming and Christ is sovereign. It is utter foolishness. It is life.

I do not worship Caesar. I cannot partake in Babylon. I cannot serve two master.

Believe, I have made my choice.

Forget about white privilege, what about Christian privilege?

Like the protest, “#BowDownBernie” is juvenile, petty, and counter-productive. Such a slogan will only continue to damage the cause of Black Lives Matter by alienating allies and potential allies.

I am disappointed that two people disrupted a rally attended by thousands at which I was invited to speak about fighting to protect Social Security and Medicare. I was especially disappointed because on criminal justice reform and the need to fight racism there is no other candidate for president who will fight harder than me.

Make no mistake: Black Lives Matter. However, attacking and alienating allies and potential allies does not help that cause, it only hurts and discredits that cause. 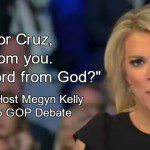 August 10, 2015 Pat Robertson Advises Grandparents To Take Grandson Away From Atheist Parents
Recent Comments
0 | Leave a Comment
Browse Our Archives
get the latest from
Nonreligious
Sign up for our newsletter
POPULAR AT PATHEOS Nonreligious
1