Florida couple forces teen into sexual slavery using the Bible and their Christian faith to justify their heinous actions.

After a victim of Christian homeschooling stepped forward to tell her harrowing tale of sexual and physical abuse in the name of the Lord a couple in Florida couple have been arrested for allegedly turning the girl into their sex slave.

ABC reports the unidentified 13-year-old girl was sent to live with Rob and Marie Johnson after her mother died. Immediately after her arrival the girl was told she could only be part of their family by having sex with the couple.

The Port St. Lucie Police Department said the girl, now 21, was homeschooled, not allowed to use the phone and forced to rehearse what to say to doctors if she was asked about sexual activity.

The girl was ordered to call Rob Johnson “Master” and required to submit to his and Marie Johnson’s sexual advances. The girl was raped by the couple twice a week for five years.

According to police, the girl, who is not identified, was beaten when she didn’t follow the couple’s directions or complete her chores.

Raw Story reports the couple believed in Old Testament law regarding marriage, under which a man can have many wives who are ultimately his property.

This pernicious and persistent problem of child marriage is one of the dirty secrets of the Christian homeschool movement. Recently Michael Farris, Chairman of the Home School Legal Defense Association, issued a statement expressing concern about “a very serious problem” that he sees “surfacing in Christian and conservative circles.” The problem: the “minimum age for marriage” and the prospect of parental sanctioned child marriage.

In his statement, Farris expressed concern about what he called “a growing tendency in the Christian and conservative movement to be seduced by a spirit of anarchy” as it relates to laws prohibiting child marriage and protecting children.

This most recent and tragic case in Florida is yet another example of the dangers of associated with the toxic combination of homeschooling and religious extremism.

The threat of rape and child marriage is not the only hazard faced by children forced into the dark and sometimes dangerous world of Christian homeschooling. One need only recall the tragic life and death of Leelah Alcorn, or the tragic circumstances of the Duggar family, to recognize the dangers inherent in the Christian homeschool movement.

True to their faith, Rob and Marie Johnson held Sunday school classes for their family at their home every week. The Lord works in mysterious ways…. 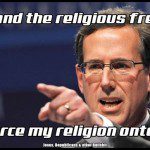 August 13, 2015 Trump Praises The Bible In Hopes Of Hustling Gullible Christians
Recent Comments
0 | Leave a Comment
Browse Our Archives
get the latest from
Nonreligious
Sign up for our newsletter
POPULAR AT PATHEOS Nonreligious
1