Last night’s GOP debate ended with Fox News host Megyn Kelly asking if any of the presidential candidates had “received a word from God.”

The odd if not offensive question, read by Kelly and submitted by a viewer via Facebook, is an obnoxious example of the fact that theistic superstition infects the nation and is taken for granted by many, including, apparently, the entire Republican party as well as Fox News.

Towards the close of the debate Kelly said:

In our final moments here together, we’re going to allow the candidates to offer their final thoughts. But first, we want to ask them an interesting closing question from Chase Norton on Facebook, who wants to know this of the candidates:

“I want to know if any of them have received a word from God on what they should do and take care of first.”

Senator Cruz, start from you. Any word from God?

While the question was odd, the answers were fairly predictable. Ted Cruz said he hears from God on a daily basis via the Bible. John Kasich said he believes in miracles, and God wants America to be strong. Marco Rubio said God blesses the US, and God blesses the Republican party. While Scott Walker declared “it’s only by the blood of Jesus Christ that I’ve been redeemed from my sins.”

The following are excerpts from the candidates’ responses:

I’m the son of a pastor and evangelist and I’ve described many times how my father, when I was a child, was an alcoholic.

There are real differences among the candidates on issues like amnesty, like Obamacare, like religious liberty, like life and marriage. And I have been proud to fight and stand for religious liberty, to stand against Planned Parenthood, to defend life for my entire career.

And I will be proud to continue to do so as president of the United States.

I do believe in miracles…

You know, today the country is divided….

… we’ve got to listen to other people’s voices, respect them, but keep in mind, and I believe in terms of the things that I’ve read in my lifetime, the lord is not picking us. But because of how we respect human rights, because that we are a good force in the world, he wants America to be strong.

Well, first, let me say I think God has blessed us. He has blessed the Republican Party with some very good candidates. The Democrats can’t even find one … And I believe God has blessed our country. This country has been extraordinarily blessed. And we have honored that blessing. And that’s why God has continued to bless us. And he has blessed us with young men and women willing to risk their lives and sometimes die in uniform for the safety and security of our people.

I’m certainly an imperfect man. And it’s only by the blood of Jesus Christ that I’ve been redeemed from my sins. So I know that God doesn’t call me to do a specific thing, God hasn’t given me a list, a Ten Commandments, if you will, of things to act on the first day.

(Note: Because of the large field, not all candidates were given an opportunity to respond to every question. For a full transcript of the debate, see the Washington Post. H/T Think Progress.) 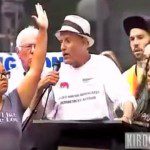