In a horrible case of real religious persecution, a 7-year-old boy in Indiana was punished and ostracized by his public school teacher after saying he did not believe in God.

Disturbing details are emerging from a lawsuit filed against teacher Michelle Meyer at Forest Park Elementary School who allegedly punished her 7-year-old student with “banishment” for not believing in God.

According to the lawsuit, Meyers forced a second grade boy (identified as A.B. in the lawsuit) to sit by himself at lunch for three days as well as ordering the boy not to talk to any of his classmates after the boy told another student he doesn’t go to church and doesn’t believe in God.

The following is an excerpt from the lawsuit, via the Washington Post:

the school day immediately before lunch when A.B. was asked by one of his classmates if he attended church.

10. A.B. responded by stating that he did not go to church and did not believe in God. He also stated that it was fine with him if his inquiring classmate believed in God.

11. The classmate said that A.B. had hurt her feelings by saying that he did not believe in God and started to cry.

12. A playground supervisor reported to Ms. Meyer what had happened.

13. At that point the students were going to lunch and Ms. Meyer asked A.B. if he had told

the girl that he did not believe in God and A.B. said he had and asked what he had done wrong.

15. She also asked A.B. if he believed that maybe God exists.

16. [The teacher] told A.B. that she was very concerned about what he had done and that she was going to contact his mother — although she never did.

22. On the day of the incident and for an additional two days thereafter, [the teacher] required that A.B. sit by himself during lunch and told him he should not talk to the other students and stated that this was because he had offended them. This served to reinforce A.B.’s feeling that he had committed some transgression that justified his exclusion.

8. A day or two after the initial incident, A.B. and his fellow-student who had become upset with his comment on the playground were sent to another adult employed at Forest Park Elementary School.

19. This person asked them what the problem was and A.B. indicated that his classmate had become upset when, in response to her question, he had said he did not go to church and did not believe in God.

21. This was, again, extremely upsetting to A.B. as it reinforced his feeling that he had done something very wrong.

To sum up, one student told another student he doesn’t go to church and doesn’t believe in God. Apparently that upset the other student, who said the statement hurt her feelings. As a consequence, the student was punished by his teacher and another school employee for simply articulating the fact that he does not believe in God and does not attend church.

The district, who for some reason is not named in the lawsuit, released the following statement about the unfortunate affair:

It is clear that it is not the province of a public school to advance or inhibit religious beliefs or practices. Under the First and Fourteenth Amendments to the Constitution, this remains the inviolate province of the individual and the church of his/her choice. The rights of any minority, no matter how small, must be protected.

The most tragic part of the story:

31. A.B. came home from school on multiple occasions crying saying that he knows that everyone at school — teachers and students — hate him.

32. Even now there are some classmates who will not talk to A.B.

33. Even now A.B. remains anxious and fearful about school, which is completely contrary to how he felt before this incident.

“He was publicly shamed and made to feel that his personal beliefs were terribly wrong.”

August 4, 2015 Trophy Hunter Uses Bible Verses To Justify Slaughter
Recent Comments
0 | Leave a Comment
Browse Our Archives
get the latest from
Nonreligious
Sign up for our newsletter
POPULAR AT PATHEOS Nonreligious
1 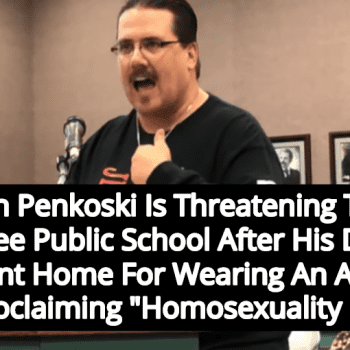