Bill Maher says Christian extremists like anti-gay Kentucky Clerk Kim Davis and her supporters are no different than Muslims who use Sharia law to promote discrimination and bigotry.

If you say, as Kim Davis and her ilk, and Ted Cruz and all those people say that actually ‘I can ignore the rule of man because the rule book of God said’ —  then you are Iran. Then you are Saudi Arabia. Then you are Sharia law.

At one point Center for Equal Opportunity Chairwoman and conservative commentator Linda Chavez agreed that Davis was wrong, while pointing out that there are many religious people in the U.S. and “you are going to have to bring them along ” slowly.

Mocking Davis and her conservative Christian supporters, Daily Beast columnist Michael Moynihan, who was one of three panelists along with author Salman Rushdie and Chavez, replied:

I don’t think that’s her intention here, to sort of slowly bring people along to this idea of gay marriage. She comes out of jail. Every Republican is waiting to have his photo taken with her. They have a shout-and-holler Cletus ceremony, everyone is holding up crosses, and Survivor’s ‘Eye of the Tiger‘ is playing… well, I’m glad we’re all coming along very slowly.

Rushdie explained that the delusional martyr complex of Davis and her supporters is a “classic trope of the religious bigot,” noting:

Especially Christians. I mean, the whole thing is based on a persecution complex. So when they say things like they’re criminalizing Christianity—really? You’re 70 percent of the population.

But everybody does this. In India right now, [which has] a 85 percent Hindu majority, leaders are saying Hinduism is being threatened. In the Islamic world, the paranoia is routine: ‘The world is anti-Muslim.’ And so this is just a trope that they’re stealing from other bigots. 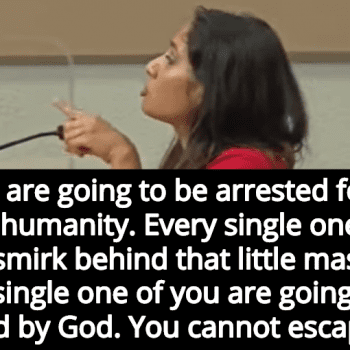 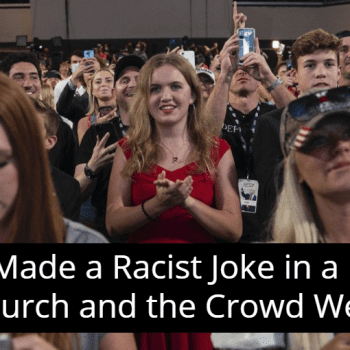 Fox and Friends Excuses Trump's Alleged Ignorance of...
There's been a lot of controversy lately over Russia putting bounties on...
view all Nonreligious blogs
What Are Your Thoughts?leave a comment
Copyright 2008-2020, Patheos. All rights reserved.