Kentucky Governor Steve Beshear is refusing to even meet with a group of Christian conservatives demanding a religious accommodation for anti-gay Rowan County clerk Kim Davis.

A small group of influential Kentucky pastors representing  the “Family Foundation of Kentucky,”  was given the cold shoulder on Tuesday after demanding to meet with Governor Beshear.

The group was seeking a meeting with the governor to ask him for a special legislative session so that lawmakers can enact accommodations for county clerks like Davis who refuse to provide marriage licenses for same-sex couples because of their sincerely held religious beliefs.

However, the governor refused to meet with the group, and has repeatedly stated that he refuses to spend taxpayer money to call the legislature into special session.

Instead the group met with the governor’s chief of staff, Larry Bond.

Beshear spokesman Terry Sebastian said Bond told the group that the governor has no legal authority to relieve county clerks of their statutory duties through an executive order.

Sebastian, the Communications Director for the Office of Governor Beshear, issued the following statement:

The Governor’s chief of staff, Larry Bond, met with a group of ministers today. The Governor’s office is always happy to meet with community leaders and citizens and hear their ideas. Mr. Bond reminded the group, however, that the legislature has placed the authority to issue marriage licenses on county clerks by statute, and the Governor has no legal authority to relieve them of their statutory duty by executive order. The General Assembly will convene in just 12 weeks and can make any statutory changes it deems necessary at that time. The Governor sees no need to spend hundreds of thousands of dollars of taxpayers’ money calling a special session of the General Assembly when 117 of 120 county clerks are doing their jobs.

The Rev. Randy Smith, a spokesman for the anti-gay Christian group, said the pastors were not pleased with the response. 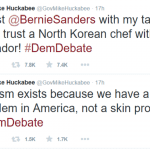 October 14, 2015 Twitter Storm: Mike Huckabee’s Racist Joke Backfires
Recent Comments
0 | Leave a Comment
"I am called a bigot, a fool, referred to as "my kind", "nigerian white supremacist ..."
MrPeach Texas Governor: ‘The Problem is Not ..."
"you sure can run your mouth here, now explain your downvote to my harmless comment. ..."
Joshua Booker Million MAGA March: Militias, Proud Boys, ..."
"now I see why you hide your name. Some TROLL in ya=== lol!"
Brian Carnevale Texas Governor: ‘The Problem is Not ..."
"The cowardly censor at FA banned me years ago.There was an uncensored Angry Atheist channel, ..."
Pablo.Dali Fox News Host Bill Hemmer Warns ..."
Browse Our Archives
get the latest from
Progressive Secular Humanist
Sign up for our newsletter
POPULAR AT PATHEOS Nonreligious
1