Televangelist Creflo Dollar: Jesus Died So I Can Be Rich

Televangelist Creflo Dollar: Jesus Died So I Can Be Rich October 10, 2015 Michael Stone

Televangelist Creflo Dollar says Jesus died so that others (including himself) can enjoy “financial prosperity.”

After receiving negative feedback from his legions of followers, Dollar (yes, that’s his name) deleted obnoxious and revealing posts from both his Facebook and Twitter accounts making the claim that Jesus died so that others can get rich.

Jesus bled and died for us so that we can lay claim to the promise of financial prosperity.

Recently HBO’s John Oliver had a hilarious look at the pernicious and predatory nature of Christian televangelists like Dollar and their despicable exploitation of vulnerable and gullible believers for fun and profit.

Oliver explained the “prosperity gospel” that Dollar and other televangelists preach to their gullible followers:

… wealth is a sign of God’s favor, and that donations will result in wealth coming back to you. That idea takes the form of ‘seed faith’—that donations are seeds that you will one day get to harvest.

The message is stupid but simple: Money is a seed, and if you give money to the supposed messenger of God, your “seed investment” will be returned to you by your imaginary God in a harvest of cash.

However, the fact that Dollar felt the need to delete his offensive but revealing social media posts indicates that even the most gullible may ultimately reject the pernicious and predatory nature of the prosperity gospel. 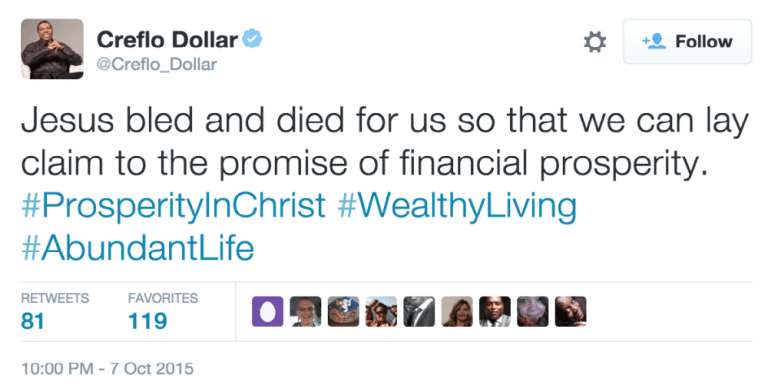 October 9, 2015
GOP Chair: No Evidence Of Misconduct By Planned Parenthood
Next Post