A mayoral candidate in Toledo, Ohio warns that if she is not elected mayor God will “visit the city in the greatest destruction” they’ve ever seen.

Self-proclaimed prophetess Opal Covey insists it’s God’s plan for her to lead the city, and if she’s not elected, God will be very angry.

Covey, a Republican, is making her fifth run for the mayoral office. Covey told The Toledo Blade:

I have to run until I become mayor. This is God’s plan, for me to be here and to be mayor.

God sent me to look upon Toledo…

Covey feels she has been robbed of votes as part of what she believes to be ongoing corruption in city government. Covey said:

I’ve run four times, this will be my fifth. I won the election in 2013 – it might be a shock to you, but not to a lot of people because my votes have been stolen ever since I’ve been running.

NBC24 reports that prior to the conclusion of the interview Covey was asked if there was anything else she would like to add. After pausing, Covey said:

Great destruction will come upon… (speaking in tongues – much gibberish)…

Thank you, Jesus. That was a confirmation. If people don’t give me what I earned in 2013 back, and I’m not on that seat in November, then you’ll see God come and visit in the city in the greatest destruction you’ve ever seen.

If Jesus confirmed it, it must be true. 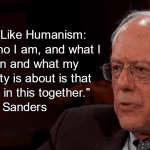 October 22, 2015 Bernie Sanders Articulates Humanist Stance On Jimmy Kimmel
Recent Comments
0 | Leave a Comment
Browse Our Archives
get the latest from
Progressive Secular Humanist
Sign up for our newsletter
POPULAR AT PATHEOS Nonreligious
1

Churches targeted in protests against Poland's near ban...
FAR-right thugs, including Robert Bakiewicz, right, were videoed yesterday (Sunday) ejecting women...
view all Nonreligious blogs
What Are Your Thoughts?leave a comment
Copyright 2008-2020, Patheos. All rights reserved.