Anonymous eliminates over 5,500 Twitter accounts tied to the Islamic State and begins to leak the personal information of suspected ISIS extremists in Operation Paris (#OpParis).

The nebulous and notorious international Internet hacktivist collective known as Anonymous declared war on the Islamic State (IS) earlier this week after the horrific massacre in Paris. The terrorist attack claimed more than 120 lives and stunned the world.

In the wake of the Paris attacks, Anonymous launched Operation Paris with the aim of tracking down members of the terrorist group. Earlier today the operation’s Twitter account @opparisofficial trumpeted their first success, proclaiming that more than 5,500 Islamic State (IS) Twitter accounts had been taken down.

Tech Insider confirms Anonymous has begun posting alleged personal information of suspected ISIS extremists, and has been busy shutting down social media accounts and websites linked to the Islamic State.

The following is an excerpt from a statement issued via YouTube announcing Operation Paris and the war on ISIS:

Hello citizens of the world.

France is shocked by the events caused by terrorism in the capital.

We first wish to express our sorrow and our solidarity with the victims, the injured, and their families.

To defend our values and our freedom, we’re tracking down members of the terrorist group responsible these attacks, we will not give up, we will not forgive, and we’ll do all that is necessary to end their actions.

During the attacks of Charlie Hebdo, we had already expressed our determination to neutralize anyone who would attack our freedom.

We’ll be doing the same now, because of the recents attacks.

Expect a total mobilization on our part.

We do not forgive.

We do not forget.

Speaking with the BBC, an Anonymous hacktivist associated with Operation Paris explained the aims of the current operation against the Islamic State:

Our main goal in this operation is to identify the perpetrators of the Paris terror attacks and all terrorist organisations linked to them, acquire intel to dig deep into the roots of their manpower, disable their propaganda and stop their reach on social media, release their information to the public, and flag down any threat to mankind.

Anonymous is a nebulous and notorious international hacktivist collective free of hierarchical leadership structure. Hence, no one press release, no one statement, no one person, no one group of persons, speaks for all who pledge allegiance to the Anonymous collective.

Bottom line: Anything Anonymous can do to hurt, humiliate, or otherwise disrupt the online activities of the Islamic State is a good thing.

November 17, 2015
Scalia Compares Gays And Lesbians To Pedophiles And Child Abusers
Next Post 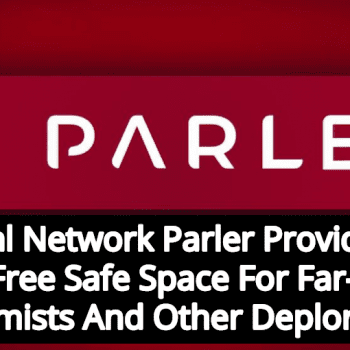