Terrorists attacking a Paris concert hall where at least 100 people were killed Friday fired into the crowd of music fans shouting “Allahu akbar” (God is Great).

According to reports, at least 100 people died in the popular Paris concert hall where terrorists seized hostages Friday.

The California rock band Eagles of Death Metal was on stage at a packed Paris nightclub Friday when gunmen stormed in, cutting down dozens of fans with automatic weapon fire and holding hundreds hostage for hours.

NBC reports More than 100 people were counted dead at the central Paris club, which holds about 1,500 people and was sold out. Many others were reported wounded.

Pierre Marie Bertin, 36, who was at the Bataclan when the shooting started, said:

At first I didn’t understand what was going on —  there were so many gunshots and debris flying at my head. You get down. You find yourself between dead bodies.

At one point, he said, some male hostages “went onto the balcony and tried to negotiate for the life of their wives with one of the guys. It was sickening.”

The attack at the Paris nightclub is reported to be one of at least six attacks that unfolded across the city in the deadliest violence Paris has seen since World War II.

French President Francois Hollande has declared a state of emergency and announced that he s closing the country’s borders. The violence spread fear through the city and exceeded the horrors of the Charlie Hebdo carnage just 10 months ago.

Newsweek reports supporters of the Islamic State are celebrating the attacks via Twitter, using an Arabic hashtag that translates to #ParisIsBurning. Some of the tweets containing the Arabic hashtag contain photos from the scene of shootings earlier this evening, while others say “Allahu Akbar,” or “God is great.”

This is a developing story. Expect updates. 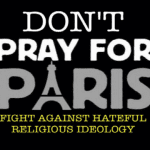