Pastor And 7 Others Indicted In Fatal Beating Of Teen Trying To Escape Church November 25, 2015 Michael Stone

A pastor and seven other church members have been charged in the fatal beating of a teen who wanted to leave the church.

Police report Lucas Leonard, 19, was severely beaten by members of the church last October, suffering injuries to the abdomen, genitals, back and thighs that ultimately proved to be fatal.

Tuesday, Pastor Tiffanie Irwin, her mother, Traci Irwin, as well as her two brothers, Joseph and Daniel Irwin, were charged in a 13-count indictment.

The brutal beating took place during a church “counseling session”called after Leonard expressed his desire to leave the Word of Life Christian Church.

Lucas’ 17-year-old brother, Christopher, was also beaten during the so-called “counseling session,” and also suffered severe injuries to the abdomen, genitals, back and thighs.

According to multiple media reports, church members were trying to get the brothers to confess their sins and seek forgiveness. The teens endured hours of torture as they were pounded with fists, kicked, and whipped with cords.

A church member testified in october that the “counseling session” lasted for 14 hours and only stopped because Lucas “was dead at that point.”

The “counseling session” was led by Pastor Tiffanie Irwin, who was involved in questioning Lucas during the beating, according to witness testimony.

Pastor Irwin was arraigned Tuesday night along with her brother, Joseph. The rest of the defendants listed in the court documents appeared in Oneida County Court Wednesday morning.

All defendants pleaded not guilty.

Most of the defendants have been scheduled for a pre-trail hearing December 7. 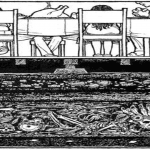 November 26, 2015 Thanksgiving Reminders Of Native American Genocide Makes Some Americans Angry
Recent Comments
0 | Leave a Comment
"Because the Irish were useless lazy layabouts who worshipped god wrong. To quote a man ..."
Omnicrom Mike Pompeo Rejects ‘Multiculturalism’ Tacitly Endorses ..."
"I think everyone who registers to vote (which should be easy and simple) should have ..."
persephone Accused Of Aiding Terrorists, Twitter Locks ..."
"I'm shocked. SHOCKed I say!"
Greg Wertz Mike Pompeo Rejects ‘Multiculturalism’ Tacitly Endorses ..."
"Not ludicrous, just never allowed to be presented komrade......"
Wfeather1940 Florida Teacher Fired After Telling Students ..."
Browse Our Archives
get the latest from
Progressive Secular Humanist
Sign up for our newsletter
POPULAR AT PATHEOS Nonreligious
1