White Christians are no longer the majority in the U.S., but continue to dominate the Republican party.

A new study from Pew Research Center’s Religious Landscape survey shows just 46 percent of American adults are white Christians, down from 55 percent in 2007.

The data, published Monday by National Journal’s Next America project, shows that even as White Chris­ti­ans shrink in their over­all num­bers, they still ac­count for nearly 7-in-10 Amer­ic­ans who identi­fy with, or lean to­ward, the Re­pub­lic­an Party.

On the other hand, the National Journal reports that Democrats divide al­most evenly between White Chris­ti­ans, non-White Chris­ti­ans, and those from all races who identi­fy either with a non-Chris­ti­an faith or, in­creas­ingly, with no re­li­gious tra­di­tion at all.

Politico reports that in less than a decade, the gap in Christian identification between Democrats and Republicans has increased by 50 percent. 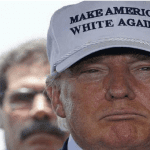