Fox Freaks Out Over ‘Prayer Shaming’

Prayer shaming? Co-hosts on “Fox and Friends” freak out over the headline on the front page of today’s edition of the New York Daily News that reads: “God Isn’t Fixing This.”

A confused and outraged Elisabeth Hasselbeck said she was “disturbed” by the headline questioning the efficacy of prayer, before angrily declaring:

I say this, if you want to line up with terrorists and try to take God away, you’re not on the right side. That’s all I’d have to say to those politicians who want to tell you to stop praying.

On the program co-host Steve Doocy had a copy of the paper and held it up, repeatedly, saying “if God won’t fix this, we need more [gun] laws.”

The following is a partial transcript of the conversation via Media Matters:

STEVE DOOCY: On the cover of the Daily News they have politicized this already. ‘Hey, Republicans,’ they’re saying, “God isn’t fixing this. As the latest batch of innocent Americans are left dying in pools of blood, cowards,” who they picture right here, Rand Paul, Paul Ryan, Ted Cruz, Lindsey Graham, oh, all Republicans, “cowards who could truly end gun scourge continue to hide behind meaningless platitudes.”

ELISABETH HASSELBECK: You know, I was so disturbed by that cover. When you see tweets like Chris Murphy out of Connecticut saying “your ‘thoughts’ should be about steps to take to stop to take this carnage. Your prayers should be for forgiveness if you do nothing again.” And then a tweet from the editor of ThinkProgress, Zack Ford, saying, “Try this: Stop thinking. Stop praying. Look up Einstein’s definition of insanity. Stop (sic) acting on gun violence prevention measures.”

The headline reads “God Isn’t Fixing This,” and is surrounded by the tweets of four Republicans – Ted Cruz, Rand Paul, Lindsey Graham, and Paul Ryan – all of whom used the word “prayers” to recognize the attack in San Bernardino.

As latest batch of innocent Americans are left lying in pools of blood, cowards who could truly end gun scourge continue to hide behind meaningless platitudes.

A companion post from the New York Daily News notes:

Another mass shooting prompted another round of silence Wednesday from GOP presidential candidates on the issue of gun control.

Instead, while the Democratic presidential wannabes were calling for stricter gun laws in the wake of the San Bernardino massacre, the Republicans were preaching about prayer.

Later in the “Fox and Friends” broadcast frequent contributor Robert Jeffress discussed the issue. Jeffress, an obnoxious Christian extremist and host of Pathway to Victory, a national radio and television ministry, said:

Look, prayer’s not some meaningless activity we engage in to make ourselves feel better. When we pray, we’re talking to somebody greater than ourselves and asking him to do some specific things — to heal those who are wounded, to give grace to those who’ve lost loved ones, to protect our law enforcement personnel. Prayer’s always the right thing we should do, it’s the first thing we should do, but it’s not the only thing we should do.

Bottom line: Nobody is “prayer shaming.” However, for Fox and Friends, prayer is more effective than gun control, and if you disagree with that “you’re lining up with terrorists.” 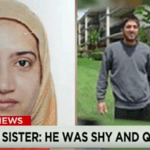 December 4, 2015 San Bernardino Shooter Pledged Allegiance To Islamic State
Recent Comments
0 | Leave a Comment
Browse Our Archives
get the latest from
Progressive Secular Humanist
Sign up for our newsletter
POPULAR AT PATHEOS Nonreligious
1