The “Stoner Jesus Bible Study” is a Colorado Bible study group that combines faith and weed as members smoke marijuana together while discussing the Scripture.

The weed friendly group formed in May 2015 after Colorado legalised the use of recreational marijuana.

Deb Button, a former school teacher and mother of two founded and hosts the weekly Bible study in her home.

Button said she first came up with the idea to host a “stoner” bible study when she began desiring to be a part of a faith community following her departure from her church a few years ago after feeling like she didn’t belong there.

We are just a bunch of stoners that come together and learn about Jesus and the Word of God.

Longtime member Mark Button said weed helped pull him closer to God and away from an addiction:

God is what got me through that. Thanks to him, I’ve been sober eight years. I don’t drink or do hard drugs anymore. I do smoke marijuana sometimes.

It puts people in a frame of mind where you think of God.  Jesus didn’t hang out with the Pharisees. If somebody passed him a pipe, he wouldn’t say no.

Another member of the group, Mia Williams, who was raised a Southern Baptist, notes:

The group has grown, and now includes a Catholic, a Mormon, a member of the Greek Orthodox church, and a curious atheist.

However, Colorado isn’t the only place where Christians are advocating for marijuana use. In Texas, Republican state Rep. David Simpson of Longview has introduced legislation that would legalize marijuana. Simpson argues “marijuana comes from God” and therefore shouldn’t be banned by the government.

Simpson, a tea party Republican, has repeatedly championed what he calls the “Christian case” for the legalization of marijuana. In a previous statement in support of his bill, Simpson said:

All that God created is good, including marijuana. God did not make a mistake when he made marijuana that the government needs to fix.

Let’s allow the plant to be utilized for good — helping people with seizures, treating warriors with PTSD, producing fiber and other products — or simply for beauty and enjoyment. Government prohibition should be for violent actions that harm your neighbor — not of the possession, cultivation, and responsible use of plants.

Rep. Simpson is wrong about God, but he is right about marijuana. People should be free to smoke marijuana for medicinal or recreational purposes without fear of legal consequences. The war on drugs in general, and the prohibition on marijuana in particular, has been a dreadful moral, legal, and political failure.

As for the question: What would Jesus do? Well just maybe he would get high, and smoke weed everyday.

For more on the “Stoner Jesus Bible Study” story watch the report below: 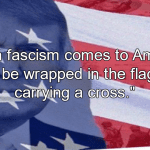