Tashfeen Malik pledged allegiance to the leader of the Islamic State on the same day she and her husband killed 14 people in San Bernardino.

CNN and multiple other sources are reporting that Malik, the wife in the husband and wife team behind the California mass shooting, allegedly posted a note of support for Islamic State leader Abu Bakr al-Baghdadi on Facebook under a different name, either during or right before the deadly attacks.

Tashfeen Malik, 27, and her husband, Syed Rizwan Farook, 28, were killed in a shootout with police hours after Wednesday’s massacre at a holiday party at the Inland Regional Center social services agency in San Bernardino

Previous reports indicate the husband and wife team behind the California mass shooting that killed 14 in San Bernardino were both devout Muslims.

Yesterday reports surfaced that Malik’s husband, Syed Farook had been radicalized by Islamic jihadis currently under FBI investigation. Law enforcement officials report Farook was apparently radicalized  and in touch with people being investigated by the FBI for international terrorism.

The LA Times reports Farook, was born in Illinois of immigrant parents from Pakistan, and was a Muslim who was recently “radicalized” when he visited Saudi Arabia. He returned to the U.S. with a wife, Malik, whom he had met online.

FBI agents discovered a huge arsenal of weapons and pipe bombs at the California home belonging to Farook and his wife Malik.

At the home agents discovered nearly 5,000 rounds of ammunition, a dozen pipe bombs and hundreds of tools for making improvised explosive devices at the property.

According to reports, the couple dropped off their baby with her grandmother, saying they had a doctor’s appointment, before they went on their deadly rampage.

December 3, 2015
Fox Freaks Out Over ‘Prayer Shaming’
Next Post 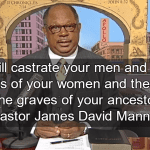